"We're known down here as the strange people with the funny dice," begins Bob Waltman, describing the reputation of the group that met at the University of Iowa's Memorial Union. Before the game of Dungeons & Dragons became famous, it looked strange to pretty much anyone who saw it from the outside--especially reporters. But the game gets a favorable notice in this February 1978 article, "'Funny dice' creates Dungeons and Dragons' by Marlene J. Perrin.

The Iowa City Wargaming Confederation had its roots in the midwestern wargaming tradition. John Chalupsky, the group's treasurer, had been a member of the International Federation of Wargaming before it collapsed in 1973. But Dungeons & Dragons clearly captivated them now. One devotee talks about how the referee "can modify the rules to suit his purposes," another struggles to explain the appeal: "You have to play it to understand it."

Perrin's article mentions that  she has competition: "the group puts out its own newspaper... which carries articles about the intricacies of Dungeons & Dragons and other games." Although editorship rotated over the years, this surely refers to their early fanzine, the Dungeon Master, which was first published in 1976. 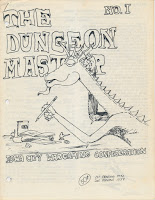 According to the back of the first Dungeon Master, "The ICWC was founded in late August, 1975 by a group of devoted gamers. Soon after came the introduction of D&D, the game which has spread like a plague across the land. A plague because it soon becomes so addicting that assignments are shunned in favor of a trip into our little fantasy-worlds." The second issue contains a listing of the staff that producing magazine, which includes one "Dave Cook, Second Presidente El Supreme and keeper of the Bone of Contention." That issue printed an article by that individual, on the subject of a recent release called Gods, Demi-gods and Heroes: 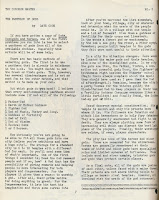 This may be the earliest published contribution to D&D by "Zeb" Cook, lead designer of second edition Dungeons & Dragons, innumerable first edition modules, and a driving force behind Star Frontiers as well as many of TSR's other early successes. The ICWC was eager to contribute to D&D, and some of their homebrew encounter tables and classes were reprinted in issue "N" of the Judges Guild Journal. This eagerness eventually caught the attention of TSR, who expressed some reservations about the use of copyrighted material in the Dungeon Master, as we gather from the profuse apology in the third issue.

Previously on D&D in the News: You're Either a Fighter, Magic-user, Cleric or Thief
Posted by Jon Peterson at 1:19 PM