From Arbela to Alexander: Gygax's Ancient Board Wargame

In the early days of gaming, a title could pass through a lot of hands before making its way to market. The original design of Arbela came from Dane Lyons, but Gary Gygax took it over by 1969 and brought out his own revision called Alexander the Great through Guidon Games in 1971. By the time Avalon Hill worked the title over in 1974, Don Greenwood had replaced much of Gygax's work. Ironically, that Avalon Hill version probably reached a wider audience that year than another little game released months earlier that Gygax worked on--but you would only know Gygax's role in Alexander if you read the fine print in the rulebook.

Dane Lyons's Arbela was reportedly the first release by the War Game Inventor's Guild, a very early group of amateur game designers. Gygax took over publishing the game from the WGIG in 1968, through his "Gystaff Enterprises" mail order venture--don't mistake it for a real business, though, it was just something that earned a few bucks for the International Federation of Wargaming (IFW) on the side. Arbela sales made the IFW something like $17.00 in 1968, at a time when the total treasury of the club was fluctuating between $200 and $300 dollars. Gygax's edition looked like this: 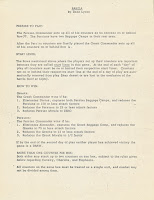 Anyone who has seen Gygax's revision of War of the Empires will recognize the typeface: he clearly produced this at the Fireman's Fund Insurance Company, as with many of his projects of the era. Not much production design was required for this version of Arbela: it was only six and a half pages of rules, another ten pages of loose charts, and then hex paper you had to tape together into a map. Only the unit counters did not come out of a photocopier. Gygax quickly learned, however, that it isn't easy to publish wargames: the rules are never as clear as you might have thought. In the beginning of 1969, he wrote of his experience:

By 1969, Lyons was no longer active in the wargame community, so the zine articles of the day clarifying and amending various aspects of Arbela had to be done by Gygax. When he compiled those revisions into a new rulebook, he listed it as "by Dane Lyons and Gary Gygax" (as we see in a later Gystaff advertisement). Soon therafter, we see the names flip to "by Gygax and Lyons." Gygax did moreover gradually remove himself from publishing the product: before the end of the year, Gystaff mail orders were being handled by Bill Hoyer, then President of the IFW--including an order from Dave Arneson. Then, Gygax convinced Don Lowry to take over production and marketing of the game in 1971. 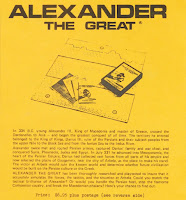 By the time Guidon Games published the game under the new title Alexander the Great, Gygax felt that he had done enough work to make the game his own. Besides retitling it, Gygax had expanded the rulebook to thirty pages, incorporating the many additions and clarifications he had posted previously in fanzines, as well as a section on historical background. Lyons's name cannot be found in the Guidon version. Guidon Games was plagued with manufacturing problems making Alexander the Great, the first boardgame Don Lowry produced at Guidon, so it would never reach a large audience.

Worried by the many wargames that SPI sold by mail, Avalon Hill decided in 1974 to augment its annual flagship releases with an inexpensive and diverse line of more niche mail-order offerings. Don Greenwood, a former fanzine editor and confidante of Gygax's, happily licensed Alexander from Guidon Games, which was effectively defunct by this point. To the board wargame audience of Avalon Hill, Alexander imported from miniature wargames concepts like morale that deepened the level of the simulation: you can see the morale tracking charts integrated into the base of the Avalon Hill Alexander board. 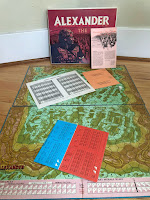 As the Avalon Hill General in the spring of 1974 explained, "Don Greenwood sat down with Gary and worked on a redesign of his original prototype." Even the Guidon Games production qualified as a mere "prototype" in Avalon Hill's eyes. "After three prototypes we came up with the game currently being tested. The rules of the earlier version were greatly improved." Greenwood frequently opined that the individuals credited as game designers often contributed less than half of the eventual work toward a game. Still, looking across three version of the Alexander rules there is an unmistakable continuity: even passing through three hands, we should probably say it remains the same game.

To all of you who are interested in Gary Gygax's legacy, I hope to see you at GaryCon this weekend!