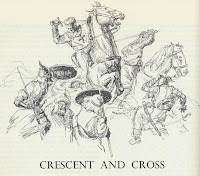 The man-to-man combat system of Chainmail contains a number of elements that anticipate but differ from  Dungeons & Dragons. As originally specified in the first edition of Chainmail, the chance to hit in combat depended upon both the sort of weapon used by the attacker and the type of armor worn by the defender. This led to an accuracy system that may seem counterintuitive in hindsight - a halberd, for example, is less effective against a target in no armor than it is against one attired in chainmail, presumably because the unencumbered defender can dodge more easily. When Gygax added a table for bowshot in the August 1971 issue of the International Wargamer (about four months after first edition Chainmail), he provided a more recognizable precursor to the Dungeons & Dragons concept of armor class. This same table would eventually turn up in the second and subsequent editions of Chainmail.