The Origins of Dice Notation 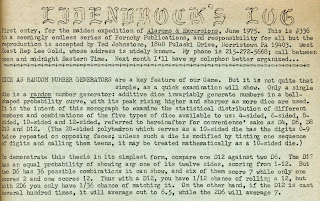 As a previous post here covered, Dungeons & Dragons was the first game to make practical use of all five Platonic solids as dice. The first printing of Dungeons & Dragons (1974) did not, however, employ the classic abbreviations of dice notation: d4, d6, d8, d12 and d20. Instead, we see constructions like, "From 2-16 snakes can be conjured (roll two eight-sided dice)." Initially, TSR had no need for dice notation, instead favoring number ranges which assumed players could infer the dice needed: this was the convention through the Holmes Basic Set (1977), which is full of systems of the form, "Damage: 3-24 points." These same conventions prescribe dice throws in the contemporary Monster Manual.

The Players Handbook (1978), however, suddenly makes liberal use of dice notation, without any preamble, as if players were expected to recognize a "d20," and more significantly, qualifiers like "5d20." This strongly hints that dice notation had been in use long before TSR embraced it, and we can in fact trace its origins to the very dawn of D&D fandom: as we see above in Alarums & Excursions #1, in an article by Ted Johnstone on "Dice as Random Number Generators."
Read more »
Posted by Jon Peterson at 12:58 PM 7 comments: