Strategos in the Twin Cities 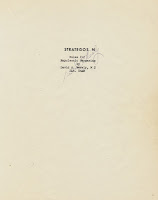 Twin Cities gamers of the late 1960s found inspiration for their wargaming systems in a pretty unlikely source: Strategos: The American Art of War (1880), a work by Charles A. L. Totten. Strategos was a military training wargame modeled on the German precedents of the nineteenth century, and was therefore not designed with entertainment in mind. By modern standards, it is unwieldy, pedantic and dull.  Famously, Dave Wesely adapted the rules of Strategos to the Napoleonic era, reducing them from the two volumes of Totten down to just twenty-four pages in his Strategos N (1970). But the Napoleonic era was only one of the settings that local gamers fitted to Strategos, and Dave Arneson himself authored two Strategos-based wargames.

The most important element that Wesely extracted from Strategos was the impartial referee who oversees a wargame and determines the results of players' actions: as I argue in Playing at the World, the concept of a referee is essential to enabling a game where "anything can be attempted," where players can propose arbitrary actions as they do in modern role-playing games. From Strategos, the idea of the referee entered Blackmoor, and then ultimately Dungeons & Dragons. Beyond this high-level playstyle, Strategos N also incorporated and simplified the combat system of Totten, most notably in its adaptation of "Table T," the standard combat resolution table of Strategos: 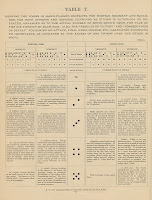 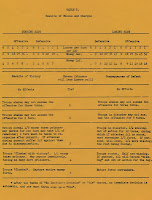 Wesely was working on an adaptation of Totten early in 1968, and by 1969 numerous local gamers were experimenting with the system; his stripped-down "Table T" became a staple of Twin Cities gaming. In January of that year, Arneson himself was already using Strategos as the basis for a Russo-Turkish war campaign he was running. These rules are preserved in his Strategos RT (1969), which circulated in a draft form along with Wesely's early Civil War Strategos adaptation, Strategos C (which we should probably understand as the first step towards his Valley Forge (1976)). Later in the year, Arneson circulated a version of Strategos adapted to the ancient setting, Strategos A (1969), which he wrote along with Randy Hoffa.

Today, most of these Strategos variants are long forgotten. Since Totten is in the public domain, the original 1880 Strategos is widely available online and in print form, though its second volume, which contains the tables, seems to be more scarce. Wesely did attempt to make his Strategos N rules available to the world one more time, in 1984, through a new spiral-bound edition with a cover by Ken Fletcher. Perhaps the best feature of this second edition is the contemporary image on the back of Wesely himself dressed up as the commander of the Grand Armee. Practically speaking, however, this edition is now as rare as the 1970 original. 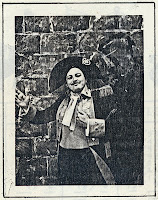