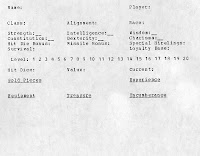 In this first-generation character sheet, we see something far more detailed than the ten bare facts suggested by Men & Magic. Tihor wisely lists not just the name of the character, but also the name of the player, at the top of the sheet. In addition to the class, he records alignment and race. And beyond the six abilities themselves, he includes various derivate statistics, specifically Constitution, Dexterity and Charisma bonuses; presumably, they are given here so further reference to the rulebooks would be unnecessary. The sheet charmingly enumerates the levels between one and twenty, as if characters would just mark them off as they inexorably advance. The system for managing hit points requires that characters first record their hit dice, then the result of that roll as the "value" or their maximum hit point total, followed by their "current" hit points after sustaining any damage. Crucially, the sheet leaves ample room for listing equipment and treasure (perhaps a less obvious distinction than Tihor might have intended), and encourages accounting for the dreaded tedium of encumbrance.

Only a month after the first issue of the Haven Herald appeared, the long-running APAzine Alarums & Excursions began. In its second issue, in July 1975, Alarums offered a different spin on the character sheet, one tailored especially to novice players.

Jack Harness put this sheet together, with a careful five-step plan for character generation that emphasizes offloading work from the dungeon master. It offers far less detail than the Haven Herald sheet, but contains several innovations of its own. As Step Three indicates, this sheet captures an early rule for rolling 3d6x6 up to three times in order to arrive at a playable character. It furthermore encourages participants to play two characters at once in a dungeon adventure. While we see here no place to record equipment, or even character level, there is quite a bit of helpful guidance about relinquishing dice, doing "only your fair share of talking," and a rather intriguing encouragement to study your character's ability scores to decide what they "suggest to you as [an] actor?" Also note the brief and early mention of house rules on spell points.

By Alarums #5, in October of 1975, the fan community had attained an even higher level of sophistication. Dick Eney, having reviewed prior efforts to record the state of a character, therefore proposed in that issue the following two-sided form, which he explicitly names a "character sheet."

The Eney sheet is the first Dungeons & Dragons character sheet worthy of the name. It provides for a legion of potential circumstances that might arise in gameplay. It anticipates that all of the base abilities might be under some temporary modification. It requires players to tabulate the value, and weight, of items in their possession, and distinguishes between weapons, miscellaneous equipment and "stashed property." It includes a place for listing languages known to the character, provisions for opening doors or hearing noise, and even includes places to fill in "times resurrected" or various geasa that a character might suffer under. It gives ample room for specifying hirelings, listing spells and even a catch-all section for "special relations, prejudices, weapon purposes, etc." In Alarums #8, Eney ran a separate, summary sheet intended for quick reference by dungeon masters, at four characters per page.

The next evolutionary step would be printing such sheets professionally, instead of typing them for distribution through a fanzine. Bob Ruppert of Boston took this step with his "Dungeons & Dragons Character Sheets," which he circulated through the American Wargamer at the end of the year: 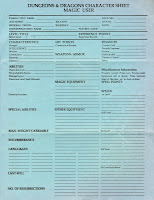 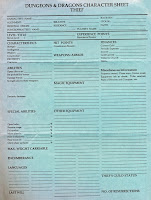 Ruppert's sheets exhibit a number of innovations. Most noticeably, each sheet is class-specific. Thus on the Magic-user sheet we see blanks for spells of various levels, whereas we find nothing about magic on the Thief sheet, but instead find blanks for percentile skills like opening locks, removing traps and so on. Only the Intelligence ability is listed in all capital letters on the Magic-user sheet, just as Dexterity is listed on the Thief sheet. The detail offered by the sheets surpasses even that of Eney's efforts; for example, the listings for gold tabulate the amount "tithed to the church."

By the time Ruppert began offering his sheets for sale, at two cents each or eight for fifteen cents, TSR had already contracted to distribute the Character Archaic (September 1975), a playing aid that contained its own character sheets. Although the sheets bundled in the Character Archaic featured portrait illustrations of different character types, the statistics listed never varied between sheets. They moreover contain a superset of the statistics of Dungeons & Dragons and Empire of the Petal Throne; therefore D&D players might puzzle over the "Psychic Ability" and "Comeliness" listings in the abilities. Although the Character Archaic sheets contained fields for saving throws, unlike any earlier sheets, they lacked many of the features familiar from the sheets designed by Eney or Ruppert. Fan reaction to the Character Archaic sheets was, unsurprisingly, lukewarm, especially after TSR began issuing cease-and-desist letters to fans who distributed their own sheets, including Ruppert. This dampened enthusiasm for fan-designed sheets, and paved the way for the character sheets TSR would begin producing itself over the next two years.

As an historical aside, several of these fan sheets mention "brevet ranks." Brevet ranks were a common convention of the early days of Dungeons & Dragons that allowed a starting character to begin at a higher level, but the character then had to earn enough experience to reach that level before they could progress beyond it. The "Swanson Abilities" mentioned on some sheets were an early system of beginning merits and flaws invented by Mark Swanson (and documented in Alarums #1) which differentiated starting characters, as otherwise all starting characters of a given class had very similar abilities. Finally, note that all of these 1975 sheets list Constitution as an ability before Dexterity; this follows the original order of abilities in Dungeons & Dragons, which later versions of the game would reverse, and is a good indicator of the age of a character record. If you want to play old school Dungeons & Dragons as the first fans did, these sheets are a good place to find some inspiration.
Posted by Jon Peterson at 6:24 PM