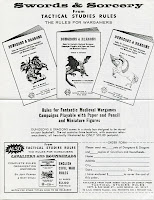 
As of that first advertisement, we see that TSR had only two products available: D&D and the lesser-known Cavaliers and Roundheads, an English Civil War setting miniature wargame. The line at the top of the order form contains handy blanks to let customers fill in how many copies of each they would like. The flyer is especially noteworthy for downplaying the title Dungeons & Dragons and emphasizing "Swords & Sorcery" above all else: this actually led some early recipients of the flyer to mistake the very name of the game. It moreover says virtually nothing about what the game is or how it works: if you had never heard of D&D before, would this advertisement convince you to try it?

By mid-year, TSR had added a third title to their product line, the Napoleonic miniature wargame Tricolor. With its release came a new advertisement:

These two versions of the mid-1974 advertisement are identical but for a pen mark. The version on the left was mailed by Gygax to the GPGPN in July; the version on the right appears in the June issue of Wargamers Digest. The name Dungeons & Dragons is still deemphasized. TSR has added Tricolor to the list of available products, replacing the order form of the earlier sheet. Where the original advertisement above suggests that orders should be sent to "Dept. B" at TSR President Don Kaye's address (542 Sage St.), in these advertisements "B" has been replaced: in one by a "W" and in the other by an undecipherable blot.

At the end of the year, after Warriors of Mars and Star Probe joined the TSR product line, TSR printed double-sided flyers, with one side greatly resembling the Feburary 1974 advertisement above, as it relegated all new releases to the flip side. We see that in the advertisement below, which Gygax sent to GPGPN in January 1975. Note that it is in color because TSR supplied the editor of GPGPN with a stack of these flyers, enough for one to be stapled into each copy, where previously the editor had photoduplicated one for publication himself. It is possible that there exist color versions of the original February 1974 advertisement as well. 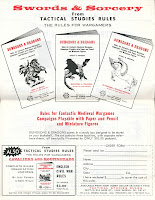 While this advertisement might at first glance appear identical to the February 1974 original above, note that the first line of the order box differs: rather than pre-specifying that customers will order D&D or Cavaliers and Roundheads, it instead allows customers to choose from other products, no doubt including Tricolor, Warriors of Mars and Star Probe, all of which appear on the reverse. This was the last version of the advertisement to show D&D in its original incarnation.

By the summer, the Dungeons & Dragons box set had been redesigned: it was now a white box rather than a woodgrain box, and the cover art of the first volume (famously a swipe from the comic book Dr. Strange) was replaced by a fresh piece of artwork. This called for all new advertising flyers, as in this black-and-white instance shown below, which shipped with an early (probably the earliest) advertisement for Empire of the Petal Throne on its reverse. Finally, this advertisement promotes the name "Dungeons & Dragons" to almost equal prominence with the promise of "Swords & Sorcery," and is also the first advertisement to convey any sense of the play of the game. It will end this tour of the earliest D&D advertisements. 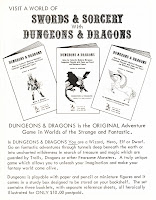