One of the many pleasures of writing about the history of games is receiving unexpected correspondence from the people whose work I study, sometimes people who are very surprised to learn that a pastime they briefly enjoyed decades ago has brought them to the attention of posterity. Such was the case with Craig VanGrasstek, whose 1974 Rules to the Game of Dungeon I covered on this blog (and in Playing at the World) as the earliest known Dungeons & Dragons variant. Craig wrote to me having long lost any copy of the Rules and understandably curious about my interest. This is easily explained: the Rules provide one of our earliest windows into fantasy role-playing as practiced by some of its first fans, a tradition that has survived as "Minneapolis Dungeon."

In the course of my exchange with Craig, he volunteered to make his work available to the readers of today. We therefore present this week the complete text of the Rules to the Game of Dungeon [download PDF] as Craig VanGrasstek originally wrote it up in the summer of 1974. I provide a bit of commentary and context in an Afterword and in endnotes. After the jump, we review three of Craig's play records from 1974, which give further insight into how this important early community went about dungeoneering. Give it a try the next time you want an "old school" experience, and see how it plays!

As my copy of the original text is nearly illegible, I retyped the eighteen-pages of the Rules while retaining pagination and where possible formatting. I had to replace the numbers on the example map, as they were virtually unreadable, though there were only a handful of places where the original text could not be deciphered and a guess had to be ventured. The lost cover has been replaced with artwork of Craig's from this era, one of several Minneapa covers he drew. In the endnotes, I try to clarify both the historical import of the Rules and the system itself, which Craig and I have discussed over the past weeks.

The three play records that follow all date to the months after the publication of the Rules. Those with a working knowledge of Dungeons & Dragons may still find some curiosities in these narratives; inspection of the Rules will clarify most of these oddities. The Rules are best studied with these play records as a chaser, as they illustrate the exercise of the rules, demonstrate a few places where practice differs from theory, and moreover impart a sense of the zany, madcap adventures that teenagers in the Twin Cities enjoyed back in 1974. 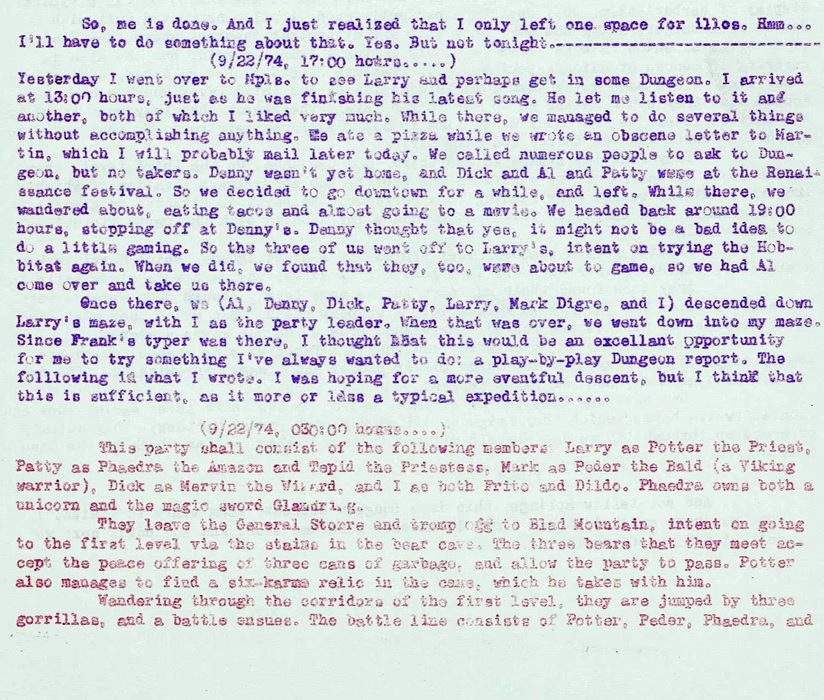 We learn that this expedition sends the party into a familiar dungeon, Blad Mountain. In it, the party encounters bears, gorillas, bulls, snakes, hawks, a giant iguana, a pack of giant rolling meatballs, and a dragon. Weapon breakage seems to be a theme of this session. Note that at the end, next to his signature, VanGrasstek has placed a lollipop with the word "Repent!" next to it: a reference to the fannish cult of comic book character Herbie Popnecker. 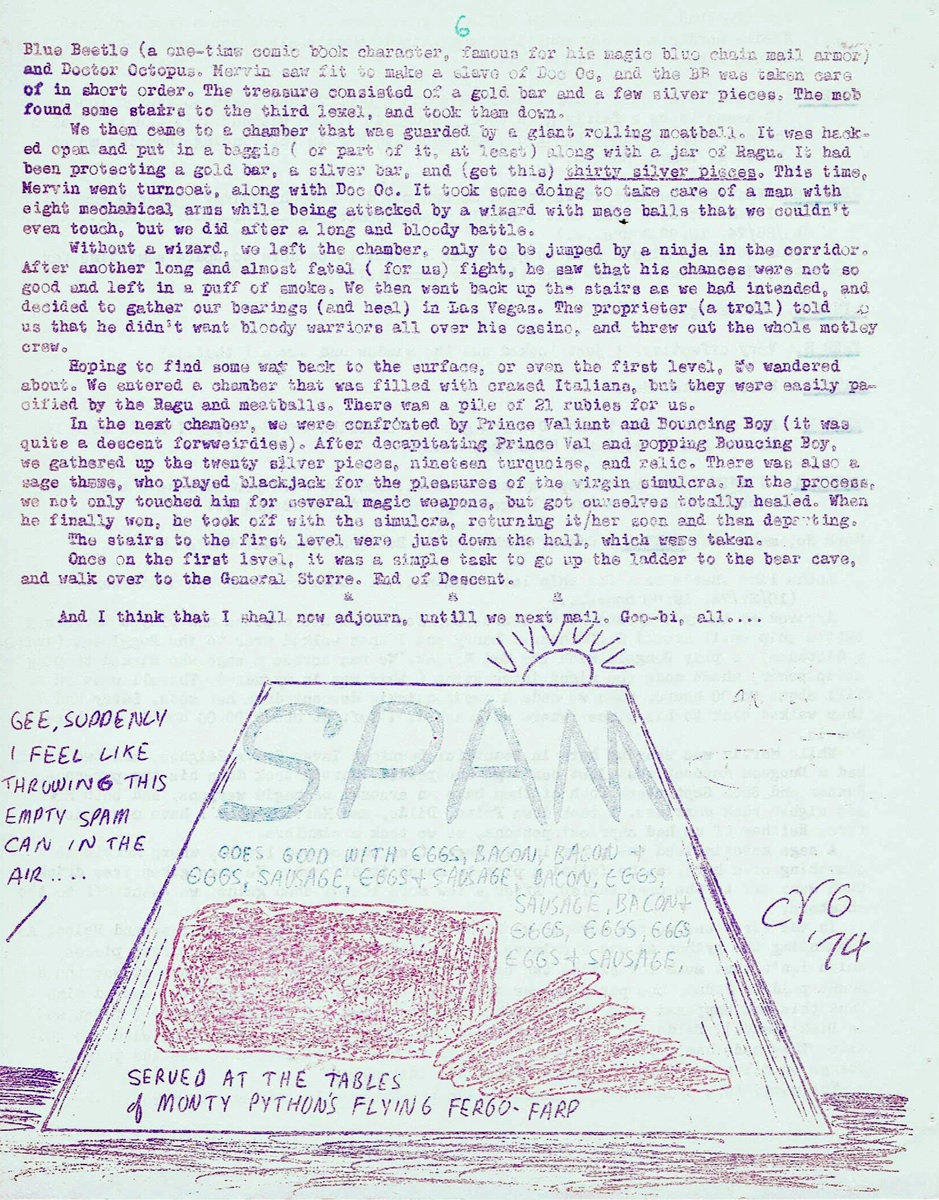 In this play report we see some indication of the level ("rank") of participants, as the two warriors are both "eighth rank," which translates to third level. This descent emphasizes gambling, and has many more "weirdies" as adversaries: foes that aren't necessarily monsters, are typically silly, and draw strongly on popular culture. The comic book characters Doctor Octopus, Blue Beetle, and Bouncing Boy all make appearances, as does Prince Valiant. The enormous tribute to Monty Python appended to the play record reminds us that their particular style of humor, which runs through all the dungeon descents, was a fresh import at the time. 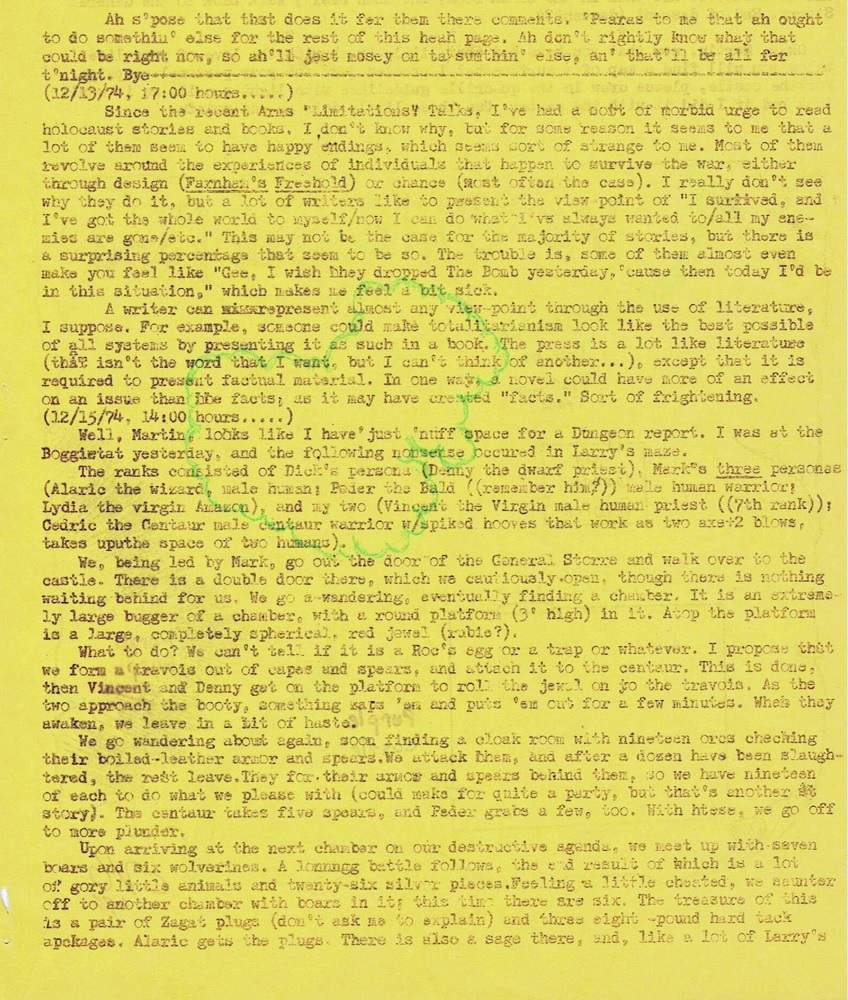 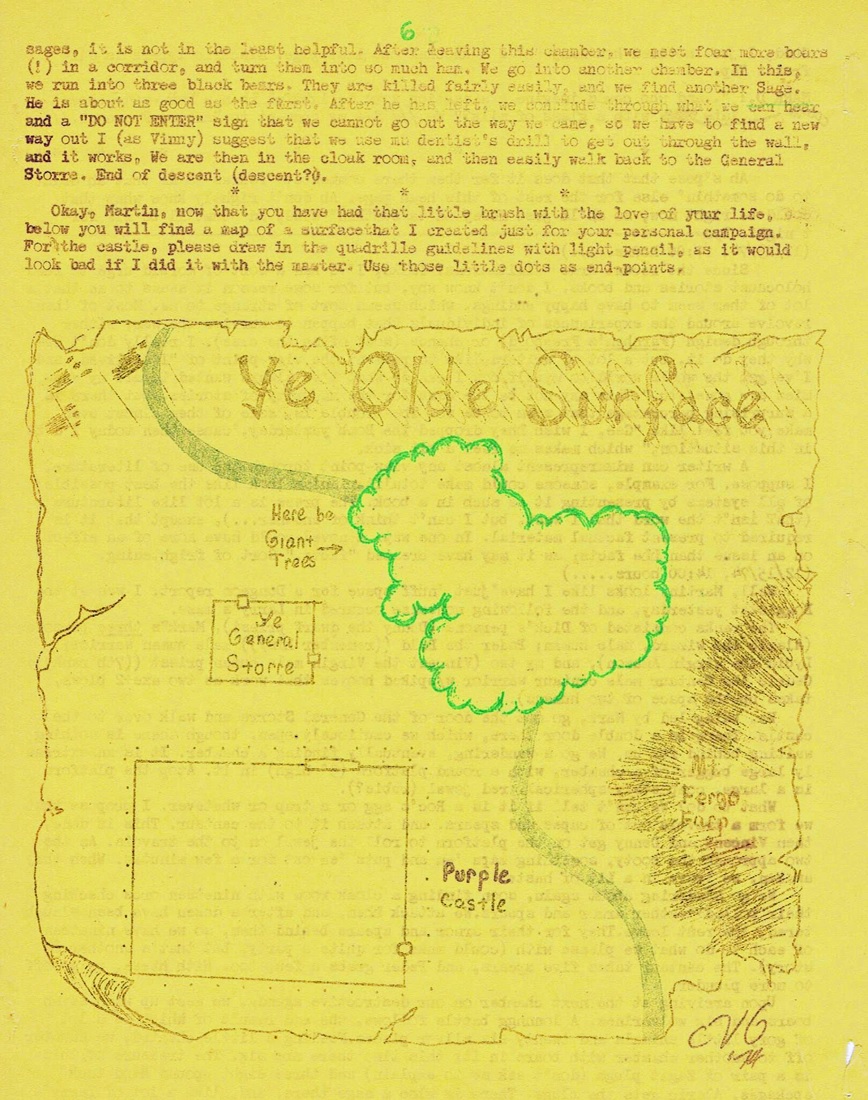 The last dungeon descent is perhaps more sober than the other two. A giant, booby-trapped gem incapacitates a few party members. Later, they slaughter a party of nineteen orcs, and the dungeon also houses vicious boars and wolverines. Even in this descent, however, the best way to escape when trapped by a "Do Not Enter" sign is to destroy a wall with a dentist's drill. VanGrasstek also supplies a handy overworld map to one of the local dungeon masters at the end of the play record.
Posted by Jon Peterson at 3:14 PM