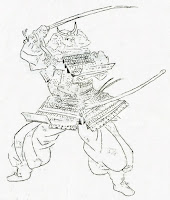 
Bruce Sterling's version of the Samurai was published in the fanzine Alarums & Excursions #32 early in 1978, as a submission by regular contributor Sean Summers, who had long gamed in Sterling's "Shang" campaign in Austin, Texas. Over time, Summers played two different Samurai characters in Shang, as well as a Ninja. In Alarums #41, Summers narrated a pivotal event in Sterling's world, a tale he calls "A Ninja Wedding," and followed this with periodic updates on its events in later issues (as in #44). If you want to play by Sterling's original Samurai rules, here they are:

The idea of playing as a samurai had a long pedigree in adventure games by this point. The popularity of samurai in films made them an occasional subject of interest to the wargaming community even before the dawn of role-playing games. The creators of Dungeons & Dragons knew the Japanese traditions of arms: Gary Gygax wrote an article about "Medieval Japan" in Domesday Book #6 (1970) which was "concerned primarily with the Samurai," detailing their weapons and armor as an initial path to simulating samurai in a wargames -- such as his current project, medieval miniatures rules that would eventually become the game Chainmail (1971). The crude illustration of a samurai at the top of this post accompanied that 1970 article.

The 1974 edition of Dungeons & Dragons, although it borrowed liberally from the medieval world, contained virtually nothing by way of Japanese setting elements. Early fans quickly developed additions incorporating trappings of their personal favorite genres, and the enormous popularity of James Clavell's Shogun (1975) helped to shift the focus to Japan, and to samurai in particular. When TSR brought the wargame Chainmail back into print with a third edition in 1975, they added some rules for samurai  to its section on the historical characteristics of troops.

Lee Gold of Los Angeles, the founder and editor of Alarums & Excursions, spent some months in the second half of 1975 in Tokyo. There she found an English-language book on ninjutsu called The Art of Invisibility which inspired her to sketch a Ninja character class in the final Alarums of the year: 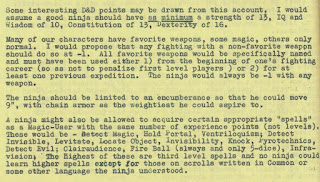 Around the same time, the Blackmoor supplement to Dungeons & Dragons introduced the Monk character class, a creation of Brian Blume's which provided an official means of incorporating certain "Eastern" ideas into the game  -- including the dreaded "Quivering Palm" attack. Americans at the time knew such cultures largely through the filter of the television show Kung-fu (which aired from 1972 to 1975) and the films of Bruce Lee, also products of the period.

Predictably, many fans rejected the "official" vision of the Monk, and counterproposed with a variety of similar classes: for example, New York fans Greg Costikyan and Ben Grossman had already implemented a Martial Artist class for local games, but the arrival of Blackmoor encouraged them to publish theirs in the fanzine Haven Herald. Among other things, the Costikyan rules restricted the Martial Artist to the use of specific martial arts weapons from Japan as a requirement for remaining Lawful. Simulating the martial arts also caught the attention that year of another budding designer: Carl Smith, later of TSR and Pacesetter, distributed a standalone tactical combat game Martial Arts under his Adversary Games label. 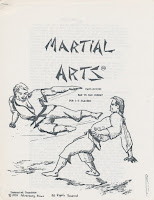 Probably the earliest rules published explicitly as a Samurai class for Dungeons & Dragons appeared in the Manual of Aurania, which became available late in the spring of 1976 -- another product of Los Angeles fans. By the fall, TSR had published in the third issue of The Dragon its own version of the Samurai class, as a subclass of Fighter, in a piece by Mike Childers. But the fan community wasn't going to let TSR have the final say in the matter.

By the time Bruce Sterling incorporated Samurai into his campaign, around 1977, there were thus already precedents to draw upon, but Summers tells us that Sterling's are "by far the best" rules available at the time. Efforts didn't stop there: in fact, the following year an entire Japanese-themed role-playing game entered the market: Tyr's Bushido (later reprinted by Fantasy Games Unlimited). No less an authority than Dave Arneson was approached by the Chaosium to write a game called Samurai in 1978, though sadly the project never came to fruition. TSR revisited the Samurai class in The Dragon #49 (as an overpowered non-player character only) and then most famously in Oriental Adventures (1985).

As 2015 draws to a close, the story of Bruce Sterling's Samurai class reminds us once again how Alarums & Excursions, now enjoying its fortieth anniversary year of consistent publication, provides us with an extraordinary window into the dawn of the hobby. Without its record, many gems like this would surely be lost to posterity. It also provides us another data point showing the role Dungeons & Dragons played in the lives of creative people in the 1970s, even those just starting out in their careers. Summers thoughtfully prods readers to purchase a copy of Sterling's debut book Involution Ocean, as "he could use another royalty check."
Posted by Jon Peterson at 3:46 PM