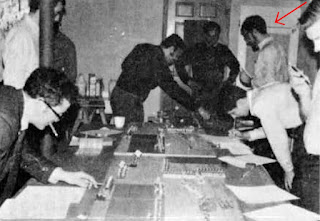 Patt was a junior at Northeastern University in Boston, studying chemistry, when he wrote these fantasy rules. He grew up just south of Boston in nearby Weymouth, and fell in with the New England Wargamers Association while in college. Previously, in high school, he remembers playing Risk and Stratego, but not much more by way of wargames. He has since gone on to a career in chemistry, having left wargames behind in his college days.

So how did he feel, when he learned of the recent news that his fantasy wargame rules had helped inspire Chainmail and thus Dungeons & Dragons?

“I was just amazed, I had totally forgotten that I had done it," Patt replies. "Those memory cells had been completed wiped out by advanced organic chemistry.” When it comes to the Courier, the paper containing the fantasy rules, Patt admits, “I had completely forgotten even about that little journal.” He thinks it unlikely that he attended the Philadelphia MFCA convention personally where the game was played in 1970, given his responsibilities at school.

Wargaming may not have been his true calling. A 1969 issue of the Courier announced a tongue-in-cheek  "Lenny Patt Award" to be bestowed twice yearly to a NEWA member "who consistently shows much tactical ability and knowledge of rules while never winning." His friend Bruce Weeks, in presenting this prestigious distinction to Patt as its first recipient, explained that "in the past three years has Lenny not only not won any games, he has not even come close to getting a draw." Asked if remembers being particularly unsuccessful as a wargame player, Patt ruefully replies, "I don't know, but I believe it." Patt did redeem himself in 1970, when evidence of his victories can be found in the pages of the Courier.

Upon graduating from Northeastern in 1971, Patt left Boston to continue his studies in Arizona. “That was the last time I did any wargaming," he recalls. He never played Dungeons & Dragons or any of the games it inspired during their peak in the 1980s. He remembers wargaming largely as a way of exploring history, so we shouldn't be surprised that he has spent many years as a civil war reenactor. And Patt seems to have passed this interest on to the next generation: his oldest son is a reenactor as well, while his youngest son is an enthusiastic Warhammer player.

Will this newfound notoriety bring Len Patt back into the games community? He assures us, “I have very little interest in starting up wargaming again.” So it is unlikely he would accept an invitation to attend a convention and speak as the "father of the fireball," unless of course it were an all-expenses paid trip with a stipend. Today, he doesn't hold on to many mementos from those days apart from some Napoleonic miniatures in his attic, which he remembers commanding under the old Column, Line and Square rules. But Patt does admit that when he gets bored, he's not above playing a little Warhammer 40K on his computer.

We expect events that turn out to be important later would have been memorable at the time they occurred - but history often defies our expectations. Like many influential occurrences at the dawn of the gaming hobby, the invention of Patt's fantasy wargaming rules was quickly forgotten, by the people it influenced and even by Patt himself. The fact that this connection has gone unnoticed for nearly half a century is a stark reminder of the fallibility of memory and the urgent need to preserve, catalog and study the rapidly-vanishing archival material of the era, which surely will reveal many more such secrets in the fullness of time.