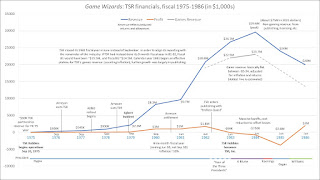 Underpinning the business story of Game Wizards is the financial model shown here of TSR as a company, from the founding of TSR Hobbies in 1975 to the ouster of Gary Gygax at the end of 1985. Although it leaves out coverage of the earliest years, this chart is in effect the narrative of Game Wizards visualized: it also locates major events on the timeline, and along the very bottom shows who was running the company when. So where does this data come from?

Before the comments below begin to fill in with citations of magazine articles, newspaper reports and late Gygax interviews where contradictory numbers are volunteered for various revenue years, let me reiterate that what is shown above is a model. TSR's external communications about these figures, even in very reputable publications (the Wall Street Journal, say), were all over the place. So, I built this model from the best data sources I could find. Of those, I believe the most authoritative are the audited financials that TSR's external accounting firms vetted. Here, for example, are the results for 1978: 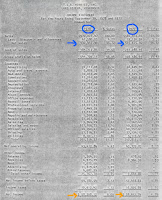 So, in my model above, the blue line charts the net sales (less returns, allowances, and so on) marked here by blue arrows, and the orange line tracks profits per the orange arrows. Sometimes, publicly reported revenue figures will track the top number instead; that's not what I chose for the model. These audited financials are always handy in that they show the previous year for comparison's sake. Unfortunately, we don't always have these figures to work with - for the early years TSR's finances were not professionally audited (there may have been some "creative accounting" around then), and building any model like this there are always going to be some gaps and ambiguities.

Looking at the model on a macro level, there's a pretty big jump after 1979 earnings: that of course was due to the disappearance of James Dallas Egbert III and the resulting media frenzy around D&D. This time is one of the few places in Game Wizards where I go into a deep dive on sales numbers, to try to track the precise impact on sales from all the resulting notoriety. To source those figures, we go to examples like this, of TSR's quarterly unit sales: 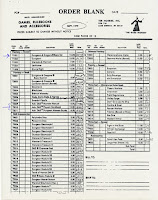 This is a format TSR used to socialize quarterly sales: they took a standard contemporary order blank and filled in unit sales for the past three months in the far right column. The date circled at the top (September 79) shows the month ending the quarter for these sales, so these are for Q3 1979. Since the Egbert incident only started to play out in the second week of September, a sharp rise of in sales of the Holmes Basic Set and other D&D products has only started to register here: probably more than half of the sales for the Basic Set shown here came in September alone. And in the quarters to come, those sales would rise dramatically.

There are plenty of pedantic details in all this, and this model draws attention to one in particular: not long after sales started to take off, TSR moved forward their fiscal year end from September to June, so effectively 1981 was only a nine-month fiscal year. TSR made this their fiscal calendar going forward, which was closer to when rivals like Avalon Hill reported their earnings. This makes 1981 revenue look like it barely moved up at all - but that's only because the second half of 1981 was counted towards their 1982 reporting. It turned out that Q3 1981 was particularly strong for earnings, and this became the source of the some of the most egregious distortions in TSR's public statements about its revenue: you will often see numbers of $16M or so claimed for 1981, but that is just borrowing for that year a quarter that doesn't belong to it.

After consistent year-over-year doubling (or even quadrupling), game sales began to plateau after 1981 -- but that isn't to say that sales of the core D&D products were steady over the following years. The core books were down sharply in 1982, and then back up in 1983 with the release of the new covers for the main AD&D books as well as Mentzer's new Basic Rules, and then promptly dropped a year later. We don't see that reflected much in my model because this was a period when D&D revenue began to rely more on sales of accessories, especially modules. Take a look at some TSR module and accessory sales figures for calendar year (not fiscal year!) 1983:

Modules sold well - really well. I've written before about how TSR tasked its growing design staff with churning these out in the early 1980s. The top 45 modules alone delivered over 3 million unit sales for TSR in 1983. That income smoothed over the volatility in core book sales.

But games weren't the only part of TSR's business story by that time: the advent of the publishing business at TSR, initially via the Endless Quest books, began to have a significant impact on revenue. We can then start to mark the grey line in the model, tracking game sales, which are broken out in some of the audited financials (but not all - the dotted line is just my projection). Everything above it is publishing, licensing, and so on. Dragonlance of course only starts to factor in at the tail end of this model.

For some years, I couldn't always find the authoritative figures I wanted. In 1985, for example, the audited financials were so bad that TSR apparently suppressed them -- I've never seen a copy. But we can still arrive at numbers through other sources. During the last of the law suits that Game Wizards covers, Lorraine Williams testified on January 20, 1986 as follows: 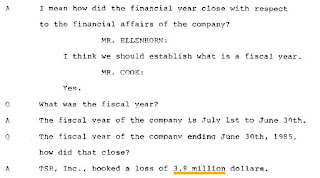 I wouldn't really be sold on a data point like that, even in sworn testimony, without some way of corroborating it. By comparing the retained earnings of the 1984 audit with the figures for 1986 (an old cantrip employed by financial sorcerers), the precise sum my model derives for TSR's 1985 loss is $3,856,169.

So, sometimes you have to fill in gaps doing a model like this - I have no illusions that the results will be perfect. But I hope this gives a sense of the sorts of sources that Game Wizards used. Since I didn't want to make the book feel even more dense by cramming it with charts like this, I thought I'd share it here instead. It was useful to me as I tried to keep all this straight.