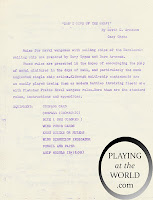 
In keeping with Arneson's output up to the summer of 1971, this thirteen-page manuscript was generated on a spirit duplicator, presumably one owned by the University of Minnesota. In it we find several common characteristics of Arneson's self-published work. First, Arneson only sporadically uses spaces after punctuation (every page of this manuscript has similar editorial errors). Second, Arneson isn't much of a speller, especially when he needs to drop a trailing "e" to form a present participle, or to tell apart "than" from "then." Third, his grammar often leads to sentence fragments and opaque constructions (as we see in the sentence beginning, "Although multi-ship engagements..."). 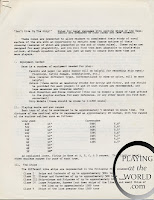 For GenCon IV in 1971, Gygax prepared a new version of the Don't Give Up the Ship rules (the end matter credits Gygax before Arneson, a good clue as to who produced it). It significantly reorganizes Arneson's early text, expanding on some concepts and discarding others. Where Arneson makes movement his fourth section, and wind determination his sixth, Gygax has wind for his his fourth section, and tacks movement on to the end of it. He expands and explicates the process for assigning ship, crew and gun values. Even on the first page visible here, his equipment list explains what you'll be using items for, and cuts a few superfluous gadgets from Arneson's draft. Ultimately, this revision is closely followed by the published Guidon Games edition of Don't Give Up the Ship, with some more minor shuffling of sections and some rewriting.

At the end of the 1971 GenCon edition of the rules, a blurb advertises that a "supplemental set of the rules will be coming out before October and may be ordered now." These seven pages of Optional Rules, when they appeared, were produced by Arneson. By this point, Arneson had graduated and lost access to his spirit duplicator, and thus disseminated the rules as photocopies of typewritten pages. Unlike his early manuscript, however, this was a publication actually sold as-is through the mail to players: it was not a draft, but a product. We can however see in it many of the same idiosyncrasies that were evinced in the earlier manuscript. 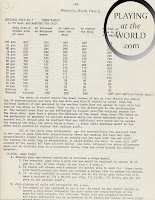 The "Optional Rules Part I" penned at the top of the page is clearly Arneson's hand. We see the same lack of spacing after punctuation, especially at the beginning of sentences. The familiar misspelling "useing" returns; in all, there are about a dozen spelling errors on this first page alone, as well as several grammatical slips. The text itself is fairly opaque. These Optional Rules did end up in the published Guidon Games edition, though only with heavy editing and modification: what remains of the table above, for example, appears on page 19 of Don't Give Up the Ship, and the gun-dumping rules are on page 20. Of course, in considering the finished Guidon product, we must also remember that Mike Carr helped get the manuscript into shape.

While drafts that Gygax wrote individually are extremely common, thanks to his incessant submissions to fanzines he controlled, unedited drafts of Arneson's own rules are much more rare. The absence of these examples has led to much speculation about the character of Arneson's output. In the broader context of wargaming fandom, many rules were often done hastily and sloppily, and Arneson is perhaps no worse an offender than the typical young enthusiast. While Arneson was a font of amazing ideas, he needed help expressing them in print, and this became a major impetus in the ongoing collaboration between Gygax and Arneson. The examples given here should help us to identify other Arneson manuscripts and understand how he approached rules authoring.