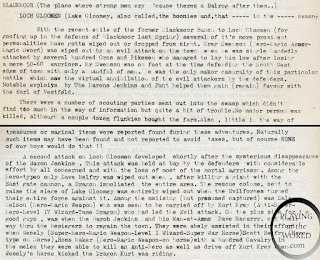 
The first thing to examine in this battle report is the shorthand used to describe the characters. Note that the characters are not designated by names separate from their players (though later in the same issue, Mel Johnson's character is referred to as "Mello the Hobbit"). Characters are parenthetically specified by the Chainmail terms "Hero," "Super-Hero" and "Wizard," as well as the opposing "Anti-Hero" and "Anti-Super-Hero." Chainmail allowed for "combination figures" which would act as both Heroes and Wizards, and in these descriptions we see a few such multi-class figures described.

Level, however, is at this stage of the campaign an attribute of Wizards but not of Heroes. We see that Kurt Krey is a Level IV Wizard, that Dave Wesely is a Level I Wizard, but no Heroes have the quality of level. The reason for this is that the terms "Hero" and "Super-Hero" already implied a difference in ability comparable to level. "Heroes" are futhermore set apart, in this text, from the ill-fated "mortal garrison" of the town; earlier in this issue, we also read about how "a couple of dozen flunkies bought the farm." We therefore see three effective strata of sword-wielders: the flunky, the Hero and the Super-Hero. In Chainmail, the Hero is four times more powerful than the lowly Armored Footman, the likely inspiration for the "flunkies" discussed here, and only half as powerful as the Super-Hero.

We also see evidence here of worldly possessions, particularly of weapons, armor and mounts. For the purposes of this write-up, however, the exact nature of the weapons are rarely given; despite the fact that Chainmail clearly specifies that Heroes wield particular weapons like swords or maces or axes, here the generic term "weapon" is most common. Early in the article, however, we see that the recently-slain Greg Svenson was not saved by a magic sword nor magic armor. Not all horses are created equal - some characters are merely "on horse" while Wesely rides a "Super War Horse." These steeds aren't just for riding: we see that the "Super War Horse" can kick a dragon hard enough to turn the tide of a battle. The gates of the town are equipped with canon, which players could use against opposing forces.

Overall, the action described here is clearly a wargame, in which the opposing sides are represented by players, rather than a dungeon adventure where the characters collaborate to fight perils controlled by the referee. We see giants and dragons attacking the town along with Kurt Krey and an anonymous Anti-Hero. The rescue force of Wesely, Maker and Belfry arrive with one hundred cavalry at their side, and we see many references to large attack forces and garrisons. The characters play a decisive role in the conflict, but they act as part of broader armies.

Understanding all of this helps us to make sense of the famous "Temple of the Frog" in Blackmoor (1975), which reprints an element Arneson designed for Loch Gloomen years earlier. Players in 1975, who were accustomed to small-scale dungeon exploration, regarded the "Temple of the Frog" with no small curiosity. How could a party of adventurers be expected to assault a temple with twenty men at its gate tower, thirty at its main gate, ten men per corner tower and a thousand guards in reserve in case of trouble? Or to deal with the first level of the dungeon, where a given barracks room might contain hundreds of men? The answer of course is to bring an army, and stage a wargame rather than a dungeon crawl.
Posted by Jon Peterson at 5:47 PM