A Playtesting Edition of Dungeons & Dragons (1973) 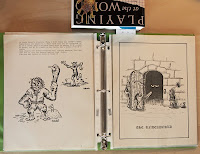 While researching Playing at the World, I spent years looking for a playtesting edition of the original Dungeons & Dragons. Early sources suggested that some of kind preliminary draft was circulated; as Gygax in 1977 remembered, "we began serious play-testing in Lake Geneva, while copies were sent to the Twin Cities and to several other groups for comment." If such a draft was indeed so widely distributed, the failure of any copy to survive seemed hard to explain. The problem, however, was that we didn't even know what we were looking for. There were only vague references to a title, like "The Fantasy Game," but no one turned up anything meeting that description. It is therefore not surprising that a document like the Dalluhn Manuscript could, for so long, hide in plain sight. It seems to be nothing less than one of these long-sought pre-publication editions of OD&D.

[EDIT: I've left this post up to reflect the beginning of my research; for my complete analysis of this document, see this post here and further confirmation based on the discovery of a 1973 Gygax working draft here.]


The Dalluhn Manuscript has no attribution, however. Nothing explicitly states that Gygax or Arneson were involved, or that this work is related to Dungeons & Dragons. So what evidence can we find within to establish that this is, in fact, a pre-publication edition of D&D? Here are three initial examples to whet your appetite:

First, in the Dalluhn Manuscript, alignment is called "division." Characters and monsters belong to the division of Law or Chaos. Like in OD&D, creatures affiliated with Law or Chaos speak a language specific to their ideology, or a "divisional language." When the final version of OD&D was edited, and the word "alignment" replaced "division," they caught most of the places in the text they needed to fix - but not all of them. In fact, the terms "divisional language" and "divisional tongue" actually survive in OD&D, even though the word "division" was changed. This is very strong evidence that this section of OD&D accidentally preserves this earlier terminology and thus descends from this text. 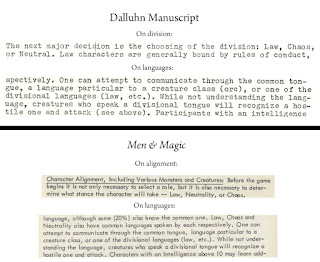 Second, the Dalluhn Manuscript provides a transitional set of character abilities, one that fits nicely between what we know about Blackmoor and what we see in OD&D. In my book, I reproduce an early Blackmoor character sheet, that of the Wizard Gaylord. We see that among his "personality" attributes are Brains, Looks, Credibility, Sex, Health, Strength, Courage, Leadership and Cunning (as well as some other practical abilities related to horsemanship and so on). We know that by 1974, for OD&D, that set had reduced to only six: Strength, Intelligence, Wisdom, Dexterity, Constitution and Charisma. In a transitional system we would therefore expect to see a transitional set of abilities, and we do: the Dalluhn manuscript contains Intelligence, Cunning, Strength, Health, Appearance, and Ego. Again, pared down to six. Cunning, we read in the text, is the prime requisite for Clerics, so obviously it is the prototype for Wisdom. We see that Brains has become Intelligence, and Looks has become Appearance (still evolving towards Charisma), but Health has not yet converted into Constitution. Nor is there yet any Dexterity, instead there is Ego. The text states that Ego is "optional and may be ignored." Overall, this is consistent with situating the Dalluhn Manuscript in the evolutionary chain between Blackmoor and OD&D. The presence of abilities like Health and Cunning, which are also shown on the Wizard Gaylord sheet, make it further unlikely that we're just looking at some later imitator or variant of D&D that made up new attribute names. 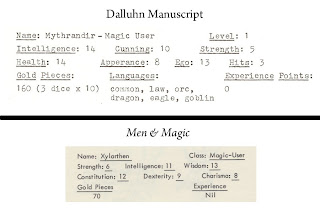 Third, the Dalluhn Manuscript contains a combat section, and OD&D clearly misplaced one. In my book, I noted as a curiosity (pg338, fn227) that there is a promise in Monsters & Treasure that "Combat will be detailed in Vol. III" which turns out to be unfulfilled. In the Dalluhn Manuscript, however, in the midst of material that would later end up in Vol. III of OD&D, there are a few pages of combat text that are clearly based on the man-to-man combat system in Chainmail. For example, where in that section of Chainmail, we read "When two figures are within melee range (3"), one or several blows will be struck," we see in the Dalluhn Manuscript, "When two creatures are within combat range and decide to use hand weapons, such as swords, maces, etc., one or several blows will be struck." This combat section however incorporates new combat tables based on a twenty-outcome to-hit roll (though this is rendered as percentiles at a five-percent increment, rather than with a d20) along with slightly-retuned version of the Appendix B tables from Chainmail. In fact, the Dalluhn Manuscript contains a number of elements cribbed from Chainmail, including the jousting rules. OD&D opted to replace these elements with a reference to the Chainmail pamphlet. The combat rules must have dropped out when that decision was made, but someone forgot to remove the forward reference in Monsters & Treasure.

Some readers may have seen the Dalluhn Manuscript discussed before by Dan Boggs, under the title of "Beyond this Point be Dragons." Dan deserves a lot of credit for identifying this as an early transitional manuscript associated with D&D, but I cannot agree with his specific analysis of its origins and purpose (for reasons I discuss here). Thus, to differentiate it from Dan's research, I am discussing it here under the name of the Dalluhn Manuscript, after its discoverer, Keith Dalluhn. Keith maintained an unwavering faith in the importance of this manuscript despite its being dismissed by many authorities. Both Keith and Dan made it possible for the community to discover this amazing artifact.
Posted by Jon Peterson at 4:46 PM