The Early Works of Gary Gygax

The beginning of Gary Gygax's career as a game designer is generally marked by the publication, through Guidon Games, of three Gygax titles early in 1971, including Chainmail. In the preceding few years, however, Gygax had released a number of games which reached the wargaming community through less professional channels such as his first gaming venture, Gystaff Enterprises. Some were stand-alone titles, others were revisions of prior efforts, and still others were variants of existing games. Since the exact nature and order of these titles has been a subject of some confusion for historians, the following list sheds light on the early works of Gary Gygax.

Little Big Horn (1968), board wargame. Released through the War Game Inventors Guild as one of their first three games. Gygax’s earliest recorded effort, Little Big Horn was noted by The Spartan in the March issue as a title that had already existed for some time, and reviewed in the May issue. Eight years later, TSR would publish a professional version of this title. Broadly, the early prototype resembled the eventual TSR production, with a long, narrow board similar to Avalon Hill titles like Guadalcanal.

Overlord: The Battle for France (1968), variant of AH D-Day board wargame.  Authored with Bill Hoyer. Appears first in the July 1968 issue of The Spartan; some amendments follow in the International Wargamer quarterly Vol. 1 No. 6. A significantly revised version of the variant appears in Europe ’44 Vol. 2. No. 1 in March 1971. Notably uses ten-result combat tables, per play-by-mail systems of the day, but provides a system for two dice to produce a number between one and ten. Adds parachute troopers, replacements, alternative victory conditions. Also in the second issue of Europe ’44 (August 1969) Gygax provides a brief sketch of an “intelligence reports” variant of D-Day, which involves committing secret information to paper to be revealed later. 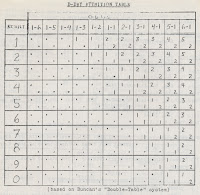 Arbela (1968), board wargame. Originally by Dane Lyons. Based on the historical Battle of Gaugamela. Also one of the original three War Game Inventors Guild games, reputed to be the first; see Panzerfaust Vol. 2 No. 5. Gygax began proposing revisions in 1968: see for example Panzerfaust, Vol. 2 No. 7, as well as Gygax’s rules additions in the International Wargamer quarterly, Vol. 1 No. 6 and Vol. 2 No. 1. Editions from 1969 forward list Gygax as a co-designer. Distributed by Gystaff Enterprises, with counters by Richard Gutenkunst. ($3.00) Later evolved into the Guidon Games Alexander the Great (1971), which in turn evolved into the Avalon Hill Alexander (1974).

The Caucasus Extension (1969), variant of AH Stalingrad board wargame. Appeared in the IFW’s quarterly International Wargamer, Vol. 2 No. 1, and subsequently in Tactics & Variants, Vol. 2, No. 12. Covers Fall Blau, the German summer offensive of 1942. To win, Germans must hold Maikop, Grozney and Baku. Includes a hex map extension and new chits for resident armies. Later reprinted in a P.O.W. version. Gygax sometimes alluded to this variant under the name "Baku." In the Canadian Wargamer #14 ( Feb 1970), Gygax mentions two other Stalingrad variants of his design: “Multi-Commander Stalingard” and “To the Urals.”

Untitled Ancient Miniature Rules (1969), miniature wargame. Ancient setting covering chariots, slings, elephants and so on. First installment appeared in the May 1969 IFW Monthly, Vol. 2 No. 5; subsequent installments appear in Nos. 6, 8 and 9, then more in Vol. 3 Nos. 4, 5, 6 and 7. Vol 2. No. 10 addresses knights, and begins transitioning towards the LGTSA Medieval Miniatures Rules. After significant refinement, detailed in a series of articles published in Wargamer’s Digest in 1974, these rules would eventually appear under the TSR imprint as Classic Warfare (1976).

[France 1940 (1969), board wargame. Apparently never completed in its original form, it was listed as a Gygax project in the Game Design Bureau of the IFW in 1969. It seems plausible that this work was eventually wrapped into the Guidon Games edition Dunkirk (1971).]

Arsouf (1969), board wargame. Published serially in Panzerfaust in Vol. 3 Nos. 6 and 8, and then the maps followed in Vol. 4 No. 1. Based on the historical Battle of Arsuf, in the Third Crusade (Richard I versus Saladin), and thus follows a medieval setting. Later marketed by P.O.W. (Panzerfaust) under the name Crusader for $1.00. As of August 1970, Panzerfaust notes that Crusader had almost sold through its first edition; a planned second edition with superior production values never appeared.

Napoleonic Diplomacy II (1969), Diplomacy variant. Appears in Thangorodrim Vol. 1 No. 3, as well as in Tricolor Vol. 1 No. 6. Five-player variant beginning in 1801. Critical historically as a key enabler for Arneson’s Napoleonic Simulation Campaign and the ongoing collaboration of Gygax and Arneson, most directly towards Don’t Give Up the Ship.

War of the Empires (1969), revision of earlier play-by-mail science fiction game by Tullio Prony. Multiple-commander space warfare game, involving various races exploring the universe, set in the 7492 “time unit” (adapted from van Vogt's Null-A series). The “Master Computer” (referee) assigns two “section commanders” (players) to fight over a given sector in starcraft-based tactical combat. Victory brings cash, which can purchase more fleets, and various ranks of achievement, once the results are reported back to the Master Computer. Gygax has briefly revived the New War Reports zine to supplement the game. Rules were issued in a stand-alone booklet with a cover, perhaps the highest production values of Gygax’s work in this era. 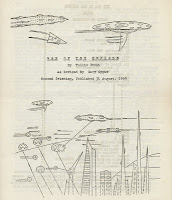 Crusadomancy (1970), Diplomacy variant. Appeared in Domesday Book #5 (July), and subsequently in Panzerfaust (November). Seven-player variant set to begin in the spring of 1161, with Great Powers comprising the Holy Roman Empire, England, France, Byzantium, Hungary and the Caliphates of the Zangid and Muwahid. The map terrain effectively covers the same ground as baseline Diplomacy.

Dark Ages, Medieval Conflict on Alternate World “Entropy” (1970), strategy-tactical wargame. Rules appear on eight pages in Domesday Book #7. Intended to be a six-player game, requiring in addition a “Justiciar” (referee). Tactical battles were to be resolved with the LGTSA Medieval Miniatures Rules, with strategic movement transpiring on a hex map provided with the rules. The setting is a plague-ridden world of roughly sixteenth-century technology, with various Germanic and Near-Eastern tribesman competing for wealth and land. The game does not seem to have been played much, if at all.

[Hyborian Age Diplomacy (1970), Diplomacy variant. Submitted to Thangorodrim at this time, but did not see print until 1972 in Supernova #12. Apparently some of the rules were lost in the intervening time, so parts of the Supernova version were rewritten by a later editor. Five-player variant set the Hyborean Age, where powers include Aquilonia, Stygia, Nemedia, Turan and the Federation (of Ophir, Koth and Corinthia).]

[Lost Diplomacy variants from this era include Khanomancy (per Liaisons Dangereuses #9, "a game of the Far East, by Gary Gygax," also noted in DB #9) and Rajomancy as well (mentioned in LD #8 and a few other places).]

Caveats:  this list specifically does not include rules proposals that are not part of any particular game, like the generic blitzkrieg rules for Avalon Hill games Gygax proposed in the September 1969 issue of the General, or the general offensive/defensive combat results table Gygax offers in the first IFW Monthly of 1969. Sometimes even variants of a specific game are too minor to note here, like the cosmetic variations proposed to Gettysburg in the IW quarterly Vol. 1 No. 6, or the Chancellorville ideas circulated through Panzerfaust in 1969, or those on Guadalcanal in the same venue in 1970. Rules variants for games other than wargames are also not included, such as the “Optional third-Party Candidate Situation” for 3M’s Mr. President that Gygax submitted to the IW quarterly Vol. 2 No. 1. This list also ignores works that came out after March 1971, such as the “Shiloh” miniature campaign rules in the April 1971 International Wargamer, or the Waterloo variations Gygax proposed in the following month’s issue. Finally, this does not list works other than games, such as poems, Diplomacy propaganda, chess analyses, military history or long fictions like Victorious German Arms, which was serialized from 1968-1970.