Gaming as we know it - that is, a hobby surrounding commercial games that simulate conflict, marketed to the general public for entertainment - began one hundred years ago, in December 1912. That's when H.G. Wells published the first installment of his Little Wars in the Christmas issue of Windsor Magazine. Wells was already famous for the science-fiction novels he had published in the 1890s, but his more recent work focused more on the present day, and the looming shadow of war that hung over Europe. By going beyond just writing about war, and instead providing seminal rules for simulating it, Wells laid the groundwork for all of the twentieth-century gaming that would follow.

Wells did not invent wargaming himself: since the late eighteenth century, recognizable wargames had been popular in the German-speaking world as tools for training officers. Wells however saw an opportunity for deriving pure entertainment from such games by simplifying them and emphasizing playability over strict realism. In this regard he surely drew on the ideas of Stevenson before him, who devised wargames for his young stepson in the early 1880s, but Stevenson never published his rules, whereas Wells presciently marketed them as a commercial product.

And the rules were all Wells provided. While board games of the day sold you a kit, Wells assumed you could find your own implements of play. He favored the toy soldiers made by Britains, large and sturdy miniatures that represented the three branches of the nineteenth-century military: infantry, cavalry and artillery. His rules covered the creation of the terrain, unit movement and of course combat. Famously, his combat is diceless: melee is decided by numerical superiority, while ranged artillery strikes were simulated by literally shooting wooden dowels from toy cannons in order to topple enemy soldiers.

By publishing his rules originally in a magazine, Wells inaugurated a long tradition of sharing wargame systems through periodicals: a process critical to the open and collaborative development of miniature wargames. The rules span only five pages in Windsor Magazine, and can easily be absorbed with only a few minutes of study. Little Wars would not appear in book form until after the new year, and it includes a detailed and thoroughly-illustrated example of play (which first appeared in the January 1913 issue of Windsor) as well as some notes towards a more complex version of the game for military use. 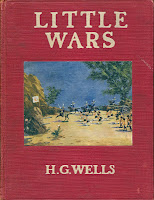 While it did not immediately create a wargaming hobby, Little Wars inspired wargamers on both sides of the Atlantic. Norman Bel Geddes and Fletcher Pratt both drew on Wells's example for their own early American games, and in England, J.C. Sachs of the British Model Soldier Society built his influential rules on Wells's foundation. Through countless intermediaries, the principles of simulation pioneered by Wells survive in the systems of games today. In fact, in the introduction to a 2004 edition of Little Wars, Gygax said unambiguously that "Little Wars influenced my development of both the Chainmail miniatures rules and the Dungeons & Dragons fantasy roleplaying game." That latter game in turn influenced the lion's share of computer game development from the 1970s onwards. But Wells's creation shouldn't be relegated to the dusty bookshelves of history: on this centenary of gaming, Little Wars remains as vital and playable as ever.