The Dalluhn Manuscript: In Detail and On Display

[EDIT: This post has now been superseded by several more recent articles, most importantly this one about how the CONTAX group in Duluth created this document. Prior to that, it was also superseded here by a post about the "Mornard Fragments," a partial 1973 Gygax working draft of D&D. The rest of this post is left here for people interested in the history of the research around this draft.]

It's been a few months since I've discussed the Dalluhn Manuscript here. In the intervening time, I have conducted a more thorough study of the document, consulted with forensics experts and early gamers, and assembled my findings to date into a paper that I present here along with a few exhibits [updated December 2015]. Those brave few who have complained that they found PatW too short may take solace in this substantial addition. Like the book, this appendix is dense, scholarly reading, but I'm working on a friendlier account that I hope will appear soon (EDIT: in issue #2 of Gygax magazine). For the impatient, I provide a high-level introduction to the evidence below. I believe the paper establishes that the Dalluhn Manuscript preserves the earliest currently known version of the game of Dungeons & Dragons.

The publication of this "interim appendix" coincides with a development in the availability of the Dalluhn Manuscript: I have loaned the original copy of this to the National Museum of Play in Rochester, NY. It goes on display there this coming weekend, on April 13th, 2013, as a feature of their Game Time! exhibit, along with many other interesting artifacts from the history of modern gaming. If want to see it first hand, do drop by; there are plenty of other amazing pieces of history on display.

For those interested in a preview of the content of the paper, without the technical detail, here are a few highlights.

First of all, the paper explores crucial editorial mistakes in the production of the earliest version of original Dungeons & Dragons (OD&D). These are cases where some passages in OD&D are inconsistent with the remainder of the text in a way that hints at what early drafts of OD&D must have looked like. Previously, these have been curiosities to scholars of OD&D. Why does the elemental monster text refer to elemental controlling devices as "medallions, gems, stones or bracelets" instead of the names in the magical item list? Why does the languages passage refer to alignment languages as "divisional" languages? How did the percentage range for the "Ring of Delusion" end up broken? With the Dalluhn Manuscript in hand, we can find answers to all of these questions: each inconsistency points to the content of an earlier draft, a pre-publication system which is preserved in the Dalluhn Manuscript. For "divisional languages," for example, we learn that "dvision" was the name for "alignment" in Dalluhn. 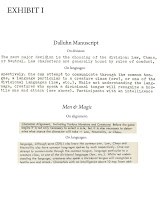 Since OD&D evolved from Arneson's Blackmoor campaign, which in turn began with Chainmail, we would expect that a pre-publication edition would show us a system in the midst of evolving from those influences into D&D as we know it. In fact there are numerous respects in which the Dalluhn Manuscript is an exact "stepping stone" between these earlier systems and OD&D. We can see this wherever notes from Blackmoor in 1972 survived: in the list of investment areas for baronies, for example, which OD&D narrows down significantly. We can see Chainmail preserved in the text of many spells and monsters, quite lucidly in "Light." The most crucial cases, though, are those like the "roc" text where we can see Chainmail and Blackmoor notes combine into the entries in Dalluhn, and then show how the Dalluhn entry clearly bridged the way to OD&D. 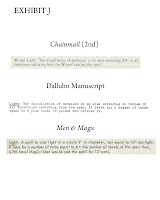 These are of course just examples: the paper examines scores of points of evidence like these. Of course, I didn't figure all of this out on my own. Daniel Boggs found many correspondences between the Dalluhn Manuscript and Blackmoor. Geoffrey MacKinney provided a very clever demonstration that the list of Magic-user spells in OD&D must have come after the Dalluhn list, as the exhibit below shows. My goal in loaning this work out to the National Museum of Play is to find a permanent home where the document will be available to scholars who can further explores its history and implications.