CONTAX was a game club. Fortunately, most clubs of the era wrote in to national fanzines to advertise for new members, and CONTAX was no exception. We can find the following in The Gamesletter in the spring of 1973:

This tells us that Chuck Monson of Duluth spoke for CONTAX, and that his group was closely associated with the Blackmoor campaign in the Twin Cities. Monson's connection to Blackmoor would not be a revelation to anyone familiar with Arneson's First Fantasy Campaign, which details (p15) how "a great peasant revolt wiped out Monson," and indeed Arneson pinpoints the "City of the Gods (located in the Desert South of Monson's old place)." Most contemporary accounts of the MMSA and Blackmoor indicate that there was participation from Duluth; for example, Gamer's Guide #40 (summer 1973) explains that "the MMSA has about 35 members of which about 20 are 'full-time' active members, with individual members residing in Duluth, Rochester and Winona who come up for a monthly meeting of all the clubs." And of course "all the clubs in the Association also participate in the inter-club Fantasy (Sword and Sorcery) simulation being run in conjunction with Gary Gygax's group in Lake Geneva."

Monson related some of the local activities in Duluth to the ever-reliable Great Plains Game Players Newsletter, writing in the sixth issue, at the beginning of 1974, that his club engaged in "a considerable amount of what you seem to term 'speculative' gaming, i.e. science fiction/fantasy," or "science fantasy" as he later puts it. His letter doesn't say anything about Blackmoor - perhaps he'd dropped out of the campaign by this point - but he notes that "we have not yet devised a cohesive schema of our fantasy world, but I am encouraging them to work in that area."

Mention of a fantasy world must remind us of another one of the outstanding problems of the Dalluhn Manuscript: that the text does not allude to Greyhawk, or Blackmoor, but instead describes a setting where there are cities called Cylorn, Lalkel, and Nadirh. Even the "Before Setting Out for Fame and Fortune" image above has signposts directing you to the "Emwood" or the "Lord of Arn." That these place names appear, instead of those readily familiar from the campaign settings of D&D's creators, has been a perennial source of doubt about the provenance of the Dalluhn Manuscript. Whose fantasy world did those names come from?

Putting an image into your club's letterhead suggests you have an intimate connection to it; effectively, it serves as an icon for your group. Given we know the full picture contains those place names, ostensibly from someone's fantasy campaign, we have to ask: would a club put such a piece campaign art into its letterhead if it were someone else's? Note as well that the letters "UMD" and "CONTAX" appear in the letterhead in the the "Old English" font (probably from a Letreset transfer): the same font used to spell out "Before Setting Out For Fame and Fortune" in the Dalluhn image. Arneson's Twin Cities group did not use Letresets for display typefaces; they instead preferred to draw them by hand.

This new link will not of course resolve every question about the Dalluhn Manuscript. For one thing, we know from the placement of the illustrations that they could be later additions to the document: that the text could have been typed earlier by a separate party. Dating its production has always been a further challenge, and while this letter sheds some welcome light on the production of the images, it can only tell us so much. We can surmise that the "UMD" in that letterhead stands for the University of Minnesota at Duluth, which must have had been home to CONTAX at the time. This is easily verified by a glance at the college newspaper, the Statesman, which has a profile on CONTAX in the February 27, 1975 issue, accompanied by a picture of Monson: 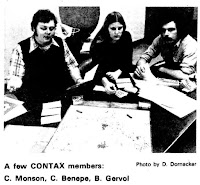 The article identifies CONTAX as "one of the newer clubs at UMD," a vague claim which could imply the club joined up with the university just weeks before, or as early as the end of 1974, say, but probably not much earlier than that. Since the letterhead explicitly mentions UMD, it surely dates from after the transition. However, given that CONTAX had been involved in the Blackmoor campaign since its formation, and indeed that was the group's original and principle activity, both this image and the Dalluhn Manuscript itself could have been circulating in the club as far back as 1973. Since Monson attests his group lacked a "cohesive schema" for its fantasy world at the beginning 1974, perhaps that's unlikely. But this letterhead at least gives us a firm "no later than," our first concrete evidence that the Dalluhn images existed in the mid 1970s.

When we combine that with evidence showing that Dalluhn was a linear descendant of Guidon D&D, we are at least honing in a date. For that, we have a number of direct textual proofs, perhaps none more striking than the fact that Dalluhn's "Dervishes" description is retyped almost verbatim from GD&D - except that it skips page 56 of GD&D, and thus bleeds into the entry on orcs that carries over from that page. It could have been an accident, or perhaps the typist's copy of GD&D was missing one or more pages. It's a mistake someone could only make working from these very pages, and only someone unfamiliar enough with the text not to catch it: 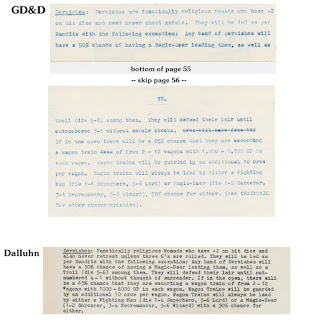 A lot of time and energy has been spent in the past few years cycling through the list of usual suspects to establish who in the Twin Cities might have typed and illustrated the Dalluhn Manuscript. There are clear ties in its text to systems used by Arneson, but not Gygax, so it must at least derive from a Twin Cities antecedent. But the umbrella of the MMSA was large, stretching down to remote groups in places like Duluth, where playtesters could have taken pre-publication material and adapted it into a cohesive schema for their own fantasy world. From there, it would furthermore be easy for us to put such a document into MAR Barker's hands: members of CONTAX mention making the 2.5 hour trek up to visit La Belle Alliance, later the Little Tin Soldier Shoppe, a Minneapolis store that Barker frequented (as he noted in Wargamer's Newsletter #149).

[And to answer an inevitable question, Mr. Greg Knutson was just using the club's letterhead here: this does not make him a likely accomplice in the development of the Dalluhn Manuscript, except in so far as members of CONTAX are now "persons of interest" in any ongoing investigation.]
Posted by Jon Peterson at 8:42 AM