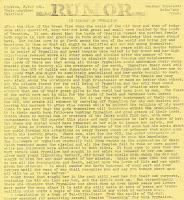 The story of Pygmalion is familiar to readers of the First Fantasy Campaign from the "Infamous Characters" subsection about Gin of Salik, which ends with the following cryptic paragraph:

The parenthetical reference to the "DB" above alerts readers to consult the legendary Domesday Book of the Castle & Crusade Society for more, and indeed the back story of Gin can be found there--but only because the DB had at the time become the venue where reports from Tom Webster's Atlantis campaign were posted. That game imagined a Carthaginian invasion of the isle of Atlantis and at the end of the fifth century BCE. Its activities stretched back at least to the beginning of 1970; Arneson, Gygax, and other members of the C&CS had a hand in it, just as Webster in turn participated in Arneson's Napoleonic Simulation Campaign (playing as the Native Americans). In an Atlantis campaign report, from November 1970, from we can find a reference to Dave Arneson's Trecht faction on a mist-shrouded island off Atlantis, and in particular his "High Hefner" who leads "the followers of the pygmalion."

Within the framework of the IFW, Webster had formed an Ancients Society, an older sibling of the more famous Castle & Crusade Society. Domesday Book #9 posed to the membership the question of whether the C&CS should merge with the Ancients Society. As of the next issue, the Domesday Book began to carry some of Ancients Society content, including a "final issue" of the Ancient Society Report dated April 30, 1971 and the following rather curious letter. It details the relationship between the godlike Pygmalion and a magician, the Gin of Kralc (in its first appearance misspelled as "Karlc"), who wanted her all to himself. Although it appears under Tom Webster's name, the letter is written by "the servant of the Pygmallion," and we should understand this as an in-game background piece by Arneson which Webster forwarded (no doubt after some editing) to the Domesday Book. 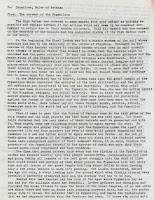 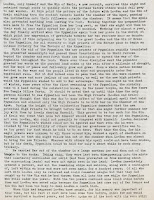 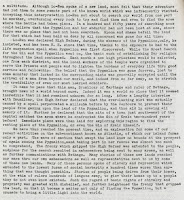 Publication of the Domesday Book had become sluggish by 1971, and issue #10 didn't reach the membership until the summer. But the material it collects, and the earlier Ancients Society dispatches, show that prior to the "medieval Braunstein" that kickstarted Blackmoor, Arneson was playing in something we should probably deem a fantastic ancient wargame campaign. The material he generated for that campaign detached from it, and could readily adapt to other campaigns, like Midgard Limited or Blackmoor itself.

By the time Arneson began putting the "Infamous Characters" piece into the form we find it in the First Fantasy Campaign, the story of the Gin and Pygmalion had passed through a succession of iterations in different campaigns. This above all cautions us that we should be careful when viewing texts like the FFC as repositories of information that was exclusive, or even original, to the activities we would usually identify as the Blackmoor campaign; the Gin existed before we start reading about the Black Moors, and the whole cult of Pygmalion is only loosely tied to that setting. Their story is not a story that played out in some Blackmoor session. Nor was this the sole piece Arneson wrote for the Midgard Limited campaign that might subvert our thinking about the nature of Blackmoor; this other 1974 piece provides something of an alternative origin story for Blackmoor, and even an aside about Bleakwood, a favorite setting of Arneson's that year. 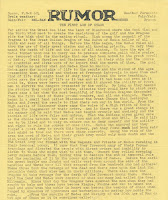 [P.S. The identity of the Gin of Salik has been a matter of some speculation over the years. The name "Kralc" has its own associations in the period, with a certain Jim Clark; we even see a "Colonel von Kralc" in the first Braunstein. In its original form as "Gin of Kralc," the connection to Jim Clark would be as clear as Greg Scott's to the "Egg of Coot," which similarly had, by 1974, drifted into the less recognizable "Ogg of Ott."]
Posted by Jon Peterson at 7:51 AM