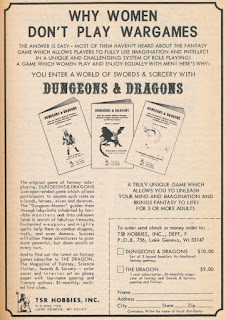 This late-1970s variant on one of the earliest Dungeons & Dragon advertisements repeats some conventional wisdom of the day about female participation in the gaming community. But as the text suggests, D&D had the potential to be "a game which women play and enjoy equally with men." Women did take up D&D in numbers very different from prior self-identified wargames, though their integration into the community faced its share of challenges.

This advertisement could be found in the wild as a full-page in Fantastic Stories magazine, June 1977. TSR then actively targeted not just gamers but fans of fantasy fiction--by some estimates, about a third of whom at the time were women.
Posted by Jon Peterson at 3:30 PM