The Legacy of Gygax's Armor

Recently, the Basic Rules of the next edition of Dungeons & Dragons became available for download. While for most, this presents an occasion to ponder the future of the game, for this blog, it inevitably turns our gaze back to the past. To magnify one microscopic detail, we find in the new rules a division of armor into familiar categories, with "studded leather" and varieties of mail including ring, scale, splint, chain and finally plate. These types seem to have been with the game since its inception. So where did they come from? We can gain some initial insight from this article by Gary Gygax in Panzerfaust #43, from April 1971: about a month from when the game Chainmail first became available.

In this early article, written three years before Dungeons & Dragons, we can pick out many familiar keywords. Referring to armor prior to the medieval period, Gygax says it "might be padded, leather, scale armor, ring mail, or chain mail," quite a procession in a single phrase. He notes that in the era of the Norman Conquest, the legs of a fighting man might be protected by "studded leather."  Later he cites "banded mail" and "splinted armor," though with the caveat that "none of the authorities can agree as to just what the Hell banded mail was." This all led up to the "Plate period" beginning in the fifteenth century, in which "suits of plate were beautifully made and decorated, but they were entirely functional." Indeed, none of the armor types in the new Basic Rules of Dungeons & Dragons (p.44) go unmentioned in this brief article -- even "hide." 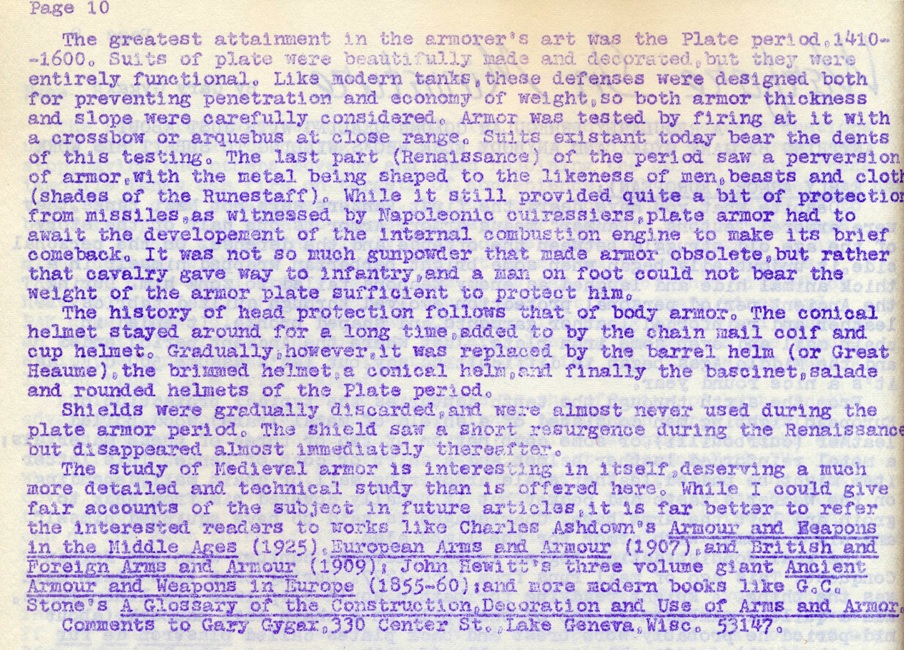 While this article handily demonstrates that Gygax knew of these armor types well before working on Dungeons & Dragons, it is most historically valuable for the citations given in its final sentence. These show us the sources that Gygax consulted for his account of armor, which has been a matter of some confusion.[*] In them, we can find the originals of images Gygax reprinted in the Domesday Book; he plundered Ashdown for weapon depictions given in Domesday Book #5, for example, and his helmets in that issue are taken from Hewitt. In Stone, he could find the following illustration of some of the more exotic armor types, namely ring and scale armor: 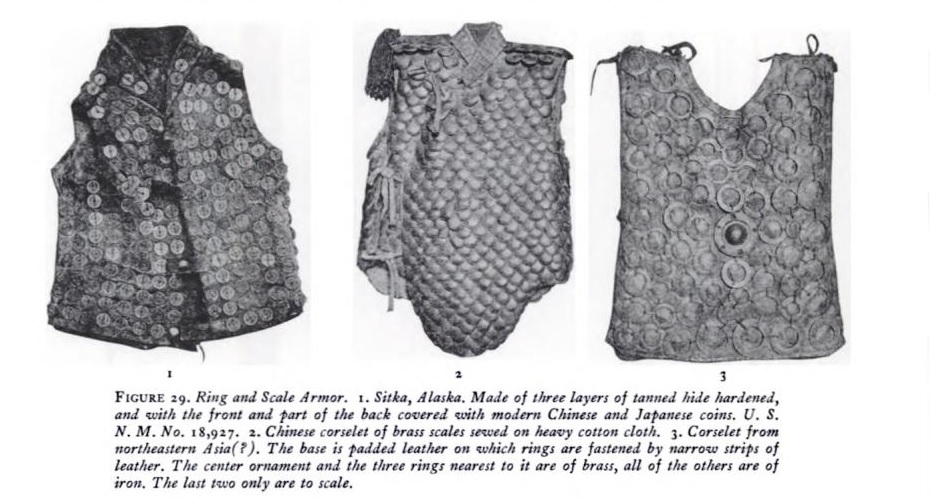 This is significant as the prevalence of those armor types in medieval Europe, especially ring armor, became a target of historical skepticism by the mid-twentieth century, largely following Blair's European Armour (1958), which criticized the interpretation of some vague medieval illustrations as indicative of ring mail. Gygax's sources, mostly from the early twentieth century, do not take Blair into account. Thus we might accuse Gygax of neglecting contemporary research in his game designs... except for the fact that Gygax actually did not introduce the ring or scale armor types to gaming. When we look to Chainmail, for example, we see that his system reduced armor to only a few base categories, further divided into those with and without shield, of "armor protection types":

For medieval miniature warfare, Gygax lumps in padded with leather, and considers banded, studded, and splint as equivalent to chain. Ring and scale mail are immediately notable for their omission. Nor did the publication of Dungeons & Dragons fill in that gap. In fact, the first edition of Dungeons & Dragons followed the Chainmail armor categories; unarmored, leather, chain, and plate, which might be worn with or without a shield. Types like padded, banded, and splint, which are at least mentioned in Chainmail, do not appear at all in the original Dungeons & Dragons. This situation remained unchanged through Holmes Basic.

So who first introduced ring and scale to role-playing games? The answer can be found in the first printing of Tunnels & Trolls (1975), which includes a detailed armor chart that divides plate armor into constituent parts (the basinet, breastplate, casque, chausse, cuirass, and solleret), and does the same for chain, ring, and scale. Here Ken St. Andre proves a solitary innovator: though he reuses the ring and scale categories in his Monsters! Monsters! (1976), few soon followed his lead: even the exhaustive list in Chivalry & Sorcery (1977) skips ring and scale, and Steve Jackson's Melee keeps to the simple leather/chain/plate categories of Dungeons & Dragons. Scale armor can be worn by Heroes in Midgard 2; though the rule addition is undated, it surely came before 1977. These types are however present in Runequest (1978), which debuted at almost exactly the same time as the original Players Handbook (1978). It is in the PHB that these familiar armor variants could all finally be worn (when purchased) by characters in Dungeons & Dragons:

Probably, we should understand the addition of more armor types as an attempt by Advanced Dungeons & Dragons to remain competitive with the deeper level of medieval simulation that new titles had begun to offer. We can  detect some early hints that this was coming: for example, the entry for "Wood Elves" in the Monster Manual (1977) contains a mention that "they usually wear studded leather or ring mail (armor class 6)." And under "Men," the entry for merchants notes that accompanying mercenaries might include those with "light warhorse, scale mail, light crossbow, sword." It is only natural that the concepts of Advanced Dungeons & Dragons should already be on display in the Monster Manual, even if there was as yet no published system to interpret "scale mail" in the game. But we should be careful to assign the proper legacy to Gary Gygax: his research on armor was ahead of its time, but in expanding his game beyond the simple categories of leather, chain, and plate, he was a follower rather than a leader.

[*] In fact, Gygax had published a detailed bibliography of his medieval sources months earlier in Domesday Book #7, which encompasses works he consulted on castles, battles, weapons, and many other matters than just armor. It does include the authors listed above among many other authorities. To capture Gygax's contemporary thinking, these lists should be preferred to the ones cited far later in the Dungeon Masters Guide (1979) or at the back of Unearthed Arcana (1985) -- with the caveat that Gygax did indeed rely heavily on the 1911 Encyclopedia Britannica for medieval information in the early 1970s for certain particulars, though that would be a story for another time. We also must remember that Conan wears "ring mail" in the "Hour of the Dragon" and scale mail in the "Queen of the Black Coast," and surely fantasy fiction held more sway over early game designers than academic histories.
Posted by Jon Peterson at 5:42 PM