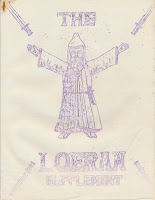 The original Dungeons & Dragons rules invited fans to make their own additions and modifications to the system, and many early adopters took TSR up on that offer. While some of the unofficial supplements and variants they produced became classics, others fell into total obscurity. Keith Abbott's Loeran Supplement is one that received notices in many fanzines of the day, but ultimately reached a very small audience. It is of interest, however, as Loera was an early attempt to create a massively-multiplayer tabletop game: as the supplement says, "to create the first effective world-sized campaign."


Full-page advertisements for Loera ran in prominent fanzines like The Dungeoneer around the beginning of 1977. The spot that follows came from the third issue; a copy in my collection has a postmark of January 5, suggesting that Abbott probably started his publicity push around the end of 1976.

As this notice makes clear, Abbott hoped to recruit more than fifty referees to run different segments of the world of Loera for groups of around twenty players, requiring referees to correspond back with him in his capacity as the "DungeonGrandMaster," to maintain central state for the game. This would make it a thousand-person campaign, were it to get off the ground, where Abbott would coordinate when players left the jurisdiction of one referee and entered another.

While his idea might seem too ambitious to be promising, Abbott enlisted some support in the community. F. Scott Johnson soon began assisting Abbott in administering Loera, not least by sending in the following blurb to Alarums & Excursions #27 extolling the virtues of the campaign.

That notice in Alarums mentions that Spellbound, a fanzine co-edited by Johnson, would carry information about Loera. In its second issue we can read the following, perhaps the most detailed public write-up of the game setting.

The next issue carried an example of the sorts of instructions to referees that might come down from the DungeonGrandMaster, including a detachable form for referees eager to accept the task of running a section.

While the Loera campaign never achieved Abbott's ambition, it provided the context for the generation of the Loeran Supplement. This edition was the fifty-page mimeo version, rather than the eighty-page offset version that Abbott and Johnson promised if sufficient interest ever called for it. The Supplement itself had to deal with a problem familiar to late OD&D systems: the scattering of the OD&D rules across a wide variety of periodicals and rulebooks. As this pre-dated the Dungeonmaster's Index, the Loeran Supplement provides an index of its own to the familiar OD&D publications and periodicals--but it points outside TSR as well to the Milgamex titles Ancient Warfare and Sword & Spear, the WRG Naval Wargame Rules for Fleet Action, and the Dungeoneer fanzine.

Of course, the Loeran Supplement is more than just an index, it also provides new house rules for the campaign. Apparently, it did away with the basic concept of level in D&D, and reduced the system down to just five character classes. But it provided a lot of granularity within those classes; for example, Magic-users as they progress have the opportunity to learn "colors" that enable them to cast various branches of magic, organized into subclasses: Enchanters, Transmuters, Psychotechnicians, Pyrotechnicians, Elementalists, Illusionists, and Mages. Casting spells uses a klutz system with the complexity ratings borrowed from the third edition of Chainmail, though for every successful cast of a spell, mages gain a bonus to future complexity checks for that spell. 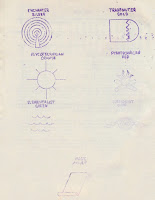 These days, when you want to do a massively multiplayer game, the Internet provides a framework superior to the postal system. In the early days of Dungeons & Dragons, as people recognized the world-building possibilities in the game, naturally some would feel the call to build world-sized structures, a goal that was out of reach at the time. But the possibility was built into the way that people thought about role-playing games, pretty much from the start.
Posted by Jon Peterson at 3:52 PM