This D&D advertisement dates from the second half of 1976, a stopping point when TSR would release no new material for the original Dungeons & Dragons game and hadn't yet put anything out to replace it. The body text is familiar from other contemporary advertisements, but the form given shown here let you order a white box, all the supplements, a Swords & Spells, and a subscription to bi-monthly The Dragon magazine. The cover of that magazine's first issue supplied the slayable fellow shown at the top.

By 1977, this ad could be seen in the wild in science-fiction magazines of the day, for example on the inside cover of the July issue of Galaxy. Published versions of it all admit of one very slight variation: the department listed in TSR's mailing address. The one shown above, from the October 1976 Wargamer's Digest, directs your mail to "Room 8," while the July 1977 issue of Galaxy version of advertisement requests you appeal to "Dept. G." and the one appearing in the August Fantasy & Science Fiction sends you to "Dept. FF." Sorting incoming mail by this discriminator was the easiest way TSR could measure the effectiveness of their various ad-buys at the time.

This ad was not the first to reuse Bill Hannan's image from the cover of the first issue of The Dragon. It had earlier appeared in more modest spots like the one below from the year before, which listed the range of fantasy offerings currently available from TSR, including titles developed outside the company like the Battle of the Five Armies. Even this tiny ad came in multiple versions with different mailing addresses; I've seen one that directs you to "Dept. 2." 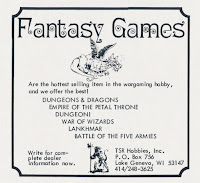 "Slain Any Wicked Dragons Lately?" appeared at the tail end of OD&D product marketing, but the slogan transitioned into the initial public push for the Holmes Basic Set. With the Basic Set, slaying dragons is of course easier than ever. We see the Holmes version in the Novermber issue of Strategy & Tactics, with instructions to mail "Dept. W10," the December 1977 issue of Fantastic Stories, directing you to "Dept. F", and even as late as Amazing Stories in May 1978: please send your order to "Dept. AM."

It might seem like a hassle to keep track of those product codes, but they follow a system that simplifies deciphering them. For literary magazines, it is easy to see from these examples: "AM" for Amazing, "G" for Galaxy, "F" for Fantastic Stories and "FF" for Fantasy & Science Fiction. Surely different patterns could be found in the other codes. The various "W" codes refer to wargaming magazines.