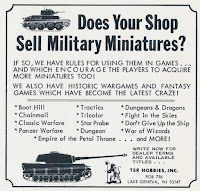 Previously on Vintage Ads: Think of TSR
Posted by Jon Peterson at 11:40 AM