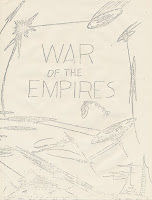 Gygax's adaptation of the War of the Empires has gotten notice here before as one of his early works, but like many of Gygax's games, it was a revision of a still earlier system. Tullio Proni began advertising his original campaign in the pages of the Avalon Hill General at the end of 1966, in the very same issue where Gygax first expressed interest in connecting up with fellow wargamers. Proni promised you could:

Needless to say, Gygax had the background in science fiction to qualify. In an article in Dragon #3, aptly named "Does anyone remember War of the Empires?", he reminisced about his own brief involvement with Tullio Proni's original campaign in 1967, which fell into abeyance shortly thereafter. A wave of similar science-fiction wargames followed, like David Montgomery's Galaxy (1968), building on this basic idea of managing an intergalactic empire by seizing planets to strip for resources in order to build armadas of ships and eliminate rival forces. When Gygax began experimenting with game design, he wrote to Proni to secure permission to take over the defunct game and its play-by-mail campaign early in 1969, which resulted in a surviving revision to the rules. 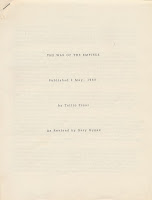 War of the Empires can be played either face-to-face on the tabletop or by mail, though the game is structured around an overarching campaign in which a "Master Computer," or campaign referee, effectively pairs up opponents and sends them the layout of a sector of the galaxy where their forces will inevitably meet. Each player starts with four scout ships (at positions marked "x" and "y"); solar systems in the sector are black squares numbered according to three systems properties: the middle number, for example, signifies how many ships can be built at that system per turn once it has been colonized. The following example sector map is from a postal conflict actually played, starting in May 1969, between Lew Pulsipher and John Sanders: 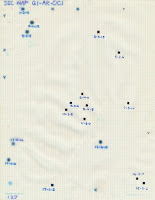 We might quibble over whether we should consider War of the Empires one of the earliest 4X games, because both the map and the statistics for each solar system are revealed to the players at game start. Thus, their "exploration" does not involve discovering the location or nature of planets, but merely reaching the planets to colonize them. Note that the postal version of Montgomery's Galaxy does have this crucial property: a gamesmaster keeps a secret map of the hexagonal "search board" listing the contents of each solar system, so when players moves into blank hexes, the referee tells them about any systems they discover within. Galaxy also has a system for scientific research that can increase ship speed, range, weapons, and can even decrease ship cost -- concepts that may sound quite prescient to fans of the computer 4X genre. But more on Galaxy will have to wait for another time.

After taking over Proni's game, Gygax also took over his campaign journal, the War Reports. He cannot help himself from detailing his own overlooked successes two years earlier in Proni's abandoned game, for which "Commander Aspirant Gygax" is given various honors by the "League of all Worlds." Anyone who knows the look of the first four issues of the Domesday Book will find the layout of the New War Reports strikingly familiar. 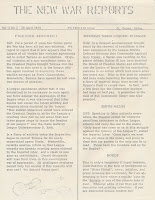 The resemblance between the Castle & Crusade Society and the campaign of War of the Empires was more than just skin deep. Among the latter game's eponymous empires is the "Greatest Empire," a dynasty that encompasses a number of persons with various noble titles, which is opposed by the "League of All Worlds." Players could volunteer to involve themselves in the politics of rival imperial factions by notifying the Master Computer, effectively joining a side-game which promised both advancement and peril in the feudal hierarchy. The various positions and titles involved bear no small resemblance to those used by the "Great Kingdom" of the Castle & Crusade Society a year later. 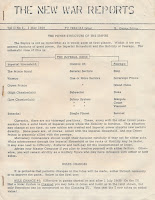 Science-fiction fans will surely recognize here some trappings of A. E. van Vogt's Isher setting. The standard path to advancement in the game came though the acquisition of "credits." In War of the Empires, you receive credits for claiming solar systems and destroying enemy ships, and you lose credits when your ships are destroyed. For example, you gain 1 credit for destroying an enemy scout, 2 for a cruiser, and 3 for a battleship. After a sector has been conquered, the victor sells its planets to the Master Computer in exchange for more credits, which can purchase rank in the empires, or buy resources to bring to the next battle for a sector. This elevation in rank through in-game successes may also foreshadow systems familiar in the "Great Kingdom" and beyond.

War of the Empires provides a key example of the sorts of paper-and-pencil campaigns Gygax and others were playing in the years leading up to Dungeons & Dragons. Like the Atlantis campaign, it illustrates how intriguing role-playing and story elements were popping up in all kinds of places as the 1970s neared. It also shows us how innovations in strategy games bubbled up from the same well, though this piece can only hint at the vast literature of homebrew science-fiction tabletop games from around this time. There is a tremendous historical wealth in this early material that is just begging to be explored and exploited by posterity.
Posted by Jon Peterson at 5:31 PM