Why Did Armor Class Descend from 9 to 2?

One of the great riddles that has vexed D&D players for generations is this: why did armor class in original D&D descend from 9 to 2 instead of increasing as it gets better? The answer is spelled out in the first draft of D&D: if you were a first-level fighter rolling to hit, the number you needed was equivalent to 20 minus the armor class of your target. To hit AC 2, you needed an 18, to hit AC 3, a 17, and so on. Armor class descended to make it easy enough to calculate your needed roll that you wouldn't even have to consult a table. Unfortunately, the published D&D game broke this algorithm, which has obscured the motivation for descending armor class ever since.

The pre-publication D&D system stipulated that an entry level fighter has only a ten percent chance to land a hit on a target wearing plate armor and a shield. With each level you went up, that likelihood would increase by five percent: so a second-level fighter needs a 17 to hit AC 2, a third-level fight needs a 16, and so on. Presumably that calculation still remained easy enough to perform that this all served as something like a precursor to THAC0 (in its relentless quest to perfect combat systems, the OSR has previously recognized this as the rough algorithm behind the original attack matrices).

If this system was so intuitive, why didn't TSR stick with it? The most obvious reason is that the attack matrix in the GD&D draft was limited to attackers level 1 through 9, so it can afford to dedicate a column to each level. The attack matrix in published D&D, however, goes up to level 16 and beyond -- so to keep a manageable number of columns in the table, they consolidated levels 1 through 3 of the original attack matrix into a single column. The average of the values in GD&D for the first three levels is 17, and that is the number we see in the first consolidated column of the published D&D chart. Things drift a bit from there: the average of levels 4 through 6 in GD&D would be 14; that has been skewed to 15 in published D&D. No doubt this drift owed to the fact that when you nearly double the number of levels, you need to slow the progression so it isn't too easy for high-level characters to hit. With this consolidation, the original elegance of armor class was instantly lost, and the rationale for the original design was hopelessly obfuscated. This broken remnant of pre-publication D&D cast a long shadow over Holmes Basic and the 1st and 2nd editions of AD&D.

We know that "armor class" was originally a Chainmail term, and Chainmail attached numerical values ascending from 1 to 8 to its armor classes, so that as the armor class of targets went up, likewise did the rolls required to hit them with missile fire. Those eight Chainmail armor classes are transposed exactly into the eight armor classes of OD&D: apart from swapping the order of "Shield Only" and "Leather Armor," the only change is that they are numbered 9 to 2 instead of 1 to 8.  But in Chainmail you roll 2d6 to hit, so moving to a d20 to-hit roll (where better rolls are higher) would require something different. In a 1979 interview with Gryphon magazine, Gygax explained, "The concept of armor class and weapon size originated in Chainmail. When I put it into Dungeons & Dragons I just reversed the order of armor class."

But attributions for design choices in original D&D are rarely uncontroversial. In a number of interviews, Arneson credited an unidentified naval wargame involving ironclads as an inspiration for armor class and other early combat system elements. Since the armor classes of D&D are obviously identical to those in Chainmail apart from their ordering, we may be at a bit of a loss to isolate what about armor class this ironclad game could have inspired -- if not the descending values. Arneson's remarks understandably sparked a manhunt for candidate systems with the right age and properties. I was one of many people who, having scoured the fossil records of gaming for the answer, asked Arneson which system he meant, exactly, to no avail. It is true in general that the concepts of armor thickness and withstanding points of damage existed in several naval wargames prior to Chainmail, but less clear which system(s) could have inspired the authors of D&D to alter the armor system in Chainmail to look the way it does in GD&D. 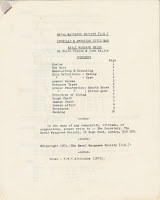 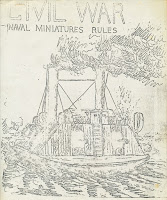 If we accept the rationale for descending armor class given in GD&D draft, then the relevant properties we'd be looking for in a naval game just got much more narrow. That's because reversing the numbers was no mere cosmetic change, but a change made for the very specific purpose of simplifying the calculation of to-hit rolls yielding a number from 1-20. While many pre-D&D to-hit systems used percentile resolution, with dice or cards, prior systems based on rolling 1-20 to hit are exceptionally rare. Given the specific way that "funny dice" got attached to D&D, there are only so many places to look for potential influences.
Posted by Jon Peterson at 2:23 PM