In developing the Art & Arcana project, there were a few details about the visual history of the game that were, well, too arcane even for a book called Art & Arcana. Each of the TSR logos over the years admits of a certain amount of variation, so a slight logo redesign may not warrant the attention of posterity -- but the case of the impostor lizardman sheds light on an overlooked piece of artwork.

The original lizardman in Greyhawk lacked the stark contrast that a logo requires, so it was a high-contrast alternative version of Bell's drawing which began to appear on early company letterhead as soon as the Tactical Studies Rules partnership dissolved in 1975. This more solid version reduced well to a thumbnail, and even granted a bit of a third dimension to the left foot truncated in the original Greyhawk crop. It was this version, rather than a shrunken Greyhawk original, which started appearing in miniature on the cover of products like Blackmoor (1975):

But ultimately, it was not solid enough: the lizardman quickly faded, as TSR changed printers and began reproducing artwork with a different process. The problem is evident in attempts to transpose it onto 1977 color products. This lizardman on the original Holmes Basic box looks like the target of a Disintegrate spell: 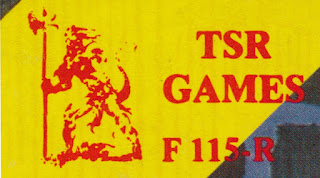 The one on the back of the Gen Con 1977 program fares little better:

Even touched up to heighten contrast, the lizardman was too visually busy to make a good logo. Something had to be done. At the end of 1977, Bell's lizardman was quietly replaced by a body double. Every effort was made to preserve the design of the original, down to replicating Greg Bell's signature; probably we should look no further than Dave Sutherland to find the responsible artist. The first printing of the original Monster Manual clearly features an inverted Bell lizardman on its cover:

... but if you turn to the very last page, the impostor reveals himself.

Even without clicking to magnify the images, one can clearly see how the impostor lizardman's legs are largely colored in black, while the inverted Bell lizardman on the Monster Manual cover sports detailed leg musculature. The impostor is imbued with a whole left foot. The blade of his axe is similarly colored solid, except for the edge, in the impostor version, whereas the original has all sorts of textures that appear confusing when minimized.

The original Bell lizardman would never be seen again. We can see the impostor on both the cover and interior of the Steading of the Hill Giant Chief, which was released for Origins in 1978:

The career of the impostor lizardman was a short one, spanning just the first half of 1978: enough time for him to show his new face in a few advertisements, on the bright red merchandisers TSR distributed to retailers, on the return address of corporate envelopes, and even in the interior of Gamma World:

However, in high contrast against the color backdrop of the Gamma World box, the impostor fares little better than the original as a logo... he may not be disintegrating, but he looks hacked to pieces:

So it was that between Origins and Gen Con in the summer of 1978, the switch was made to the new wizard logo, which would appear on the Players Handbook and the module series beginning with Descent into the Depths of the Earth. If we put it under a microscope, the wizard reveals a bit of detail, but it is iconic, easily recognizable from its outline alone, even when inverted -- and even when miniaturized down to fit the spine of a slender hardcover book to a size where text is practically illegible. The wizard would last TSR into the 1980s. 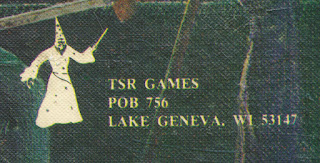