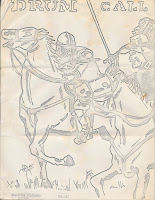 Bell's signature blocky style should be readily recognizable to people familiar with his D&D art, like the iconic lizardman which served as TSR's logo, but in case there's any confusion, inside we find an explicit credit to him - and a nod to fellow Rockford gamer Jeff Perren's interest in screening films. From Bell's connection to Perren, we can easily understand how he came to work on Cavaliers and Roundheads, a collaboration between Perren and Gary Gygax.

Other issues of Drum Call lack credits for cover illustrations, like this one from #6, which has a "cover drawn by" inside which was never filled out with a name. But we can probably safely ascribed this to Bell as well, especially after comparing it to this cartoon from the fifth issue of the Strategic Review in 1975. 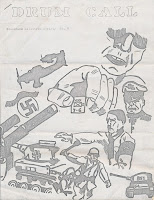 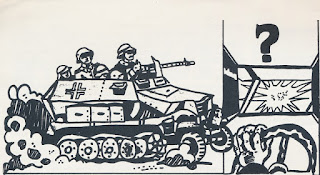 One of the great privileges of working on a book like Art & Arcana is that you get to meet a lot of these original artists, people who never could have imagined that their work would bring them to the attention of posterity. Greg Bell is a most humble guy, if perhaps a bit mischevous; it was a pleasure to talk to him last year down at an old hobby shop in northern Illinois about working with Gary Gygax on some of the earlier fantasy art in the history of gaming. 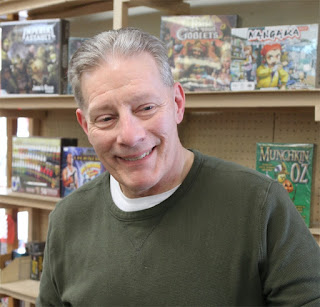 Inside Drum Call, we can find an interesting tidbit of that fantasy history. On September 2, 1972, gamers in Rockford held a convention that drew about fifty people, including Gary Gygax, his son Ernie, and Don Kaye from Lake Geneva, as well as locals like Jeff Perren, Gygax's co-author on Chainmail. But perhaps most intriguing here is the reference to "Mary of the Lake Geneva group," who ran a fantasy game. Could that be Mary Gygax? No, much more likely it was Mary Dale, one of the early playtesters of Dungeons & Dragons, who we might surmise was already hooked on fantasy before the fateful collaboration between Gygax and Dave Arneson towards Dungeons & Dragons had begun. 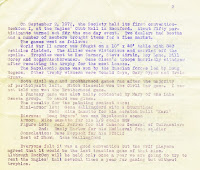