Dungeons & Dragons grew out of a tradition of miniature wargaming, and distributors of figurines were among the first companies to supply D&D to hobby shops. Although the D&D rules downplayed the necessity of using minis, they do tout their value in adding "real spectacle" to the game through "the eye-appeal of the varied and brightly painted miniature figures." Miniatures were to early D&D what graphics became for computer games. Supplying miniatures suitable for fantasy RPGs ultimately grew into a substantial industry of its own, but at the humble beginning, the first miniatures that TSR sold along with D&D were made by the father of American miniature wargaming: Jack Scruby. Above are examples of some of these early Scruby miniatures arrayed for combat.

Although we had the opportunity to show some fantasy miniatures ("Heavy Metal") in the Art & Arcana project, we did not have a chance to get into the knotty details of the earliest products in the space. Anyone who has glanced at the back of Men & Magic in the first printing of D&D would know that TSR had a pretty thin catalog at the beginning of 1974. The only thing they could advertise in that space other than Cavaliers and Roundheads and dice was "a complete line of Scruby Miniatures, including Fantasy." 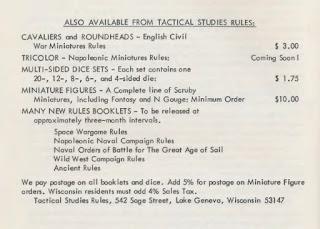 The reason they had these minis available right out of the gate is that Don Lowry had approached Jack Scruby earlier about producing a line of these figures for Chainmail. At the time Chainmail appeared, no one produced fantasy miniatures; Gary Gygax and Don Kaye had to make "conversions" of various historical soldiers and plastic toys into their imaginary combatants. Scruby was a natural choice for the job because he had an unmatched pedigree in the figure business: when he founded the War Game Digest in 1957 and jumpstarted the American miniature wargaming community, he had already been casting figures for years. Gygax worked closely with Scruby on the development of this fantasy line, reviewing samples of the projected figures in the spring of 1973, before TSR was even founded.

TSR hoped Scruby would distribute D&D rules, so they promoted his fantasy figures wherever they could; they sold Scruby miniatures at their booth at GenCon in 1974. If you inquired about these fantasy figures with TSR that year, you would get back the following description of their Scruby fantasy offerings, along with some ideas for how the miniatures could be used and integrated with existing collections: 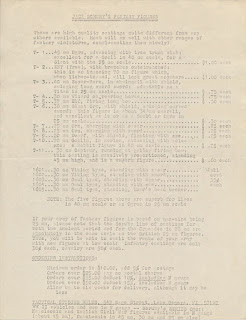 A few interesting things to note about this initial list: for one, it suggests multiple purposes for the miniatures at different figure scales, for example proposing that the Ogre figure could serve as a Gnoll or a Giant when used with figures outside the base scale, and the Super-Hero could be a Titan among 25mm figures. Titans were not yet in the game: they would be first specified in Greyhawk in 1975, though their existence had already been teased in the first printing of D&D. Goblins could also serve as hobbits with the right paint job. It is something of a narrow list: Gygax had corresponded with Scruby about a far wider range of monsters in 1973, including wraiths, balrogs, and most importantly dragons -- the absence of the dragon in this starting line-up is sorely felt.

Scruby would add to the selection as the year went on. Gygax had recommended to Scruby that he cast at least one standing wizard, in addition to the mounted T-4 figure. This would be produced as figure T-13. By the time Scruby published his Soldier Factory News for the summer of 1974, we can see the line has grown to fourteen Tolkien minis. Scruby was no subject matter expert on fantasy: centaurs are not really a Tolkien thing, say. We see in T-5 he gives the singular of "elves" as "elve," and indeed the bases of his figures reflect that. 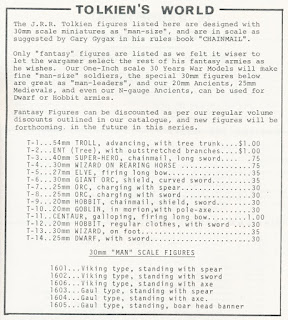 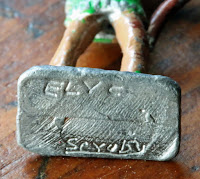 Whenever we dig deep into historical sources, we always uncover a riddle or two. Note that Scruby here gives figure T-9 as "Hobbit, chainmail, shield, sword." Gygax above described T-9 as "Dwarf, with shield, fighting with axe." When Don Lowry lists the same figure in Lowrys Guidon #9, he gives it as "Dwarf, with shield, fighting with sword." So which is it supposed to be, a hobbit or a dwarf, and does it wield a sword or an axe? We might venture that the figure in the lower left of the panorama at the top of this post is what Gygax meant by T-9: its base does label it as a dwarf. Unfortunately there survives little period photography of these miniatures, though we have an unlabeled picture below from a 1975 Wargamer's Digest which could conceivably be T-9 as Scruby describes it; the one to the right is certainly T-12. 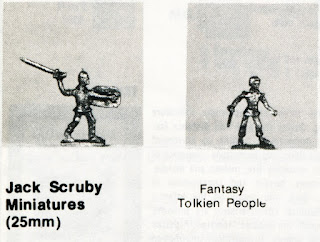 Or maybe the figure shown here on the left was a T-14, and its description omits mention of the shield? When he first saw Scruby's samples in 1973, Gygax complained that the dwarf should be "a big larger than Goblins" and that "to be perfect they should be made stockier -- perhaps nearly as broad in the shoulder as they are tall." He does not then record seeing a hobbit at all. But perhaps Scruby never beefed up his dwarves, and there is no practical way to tell them apart from his hobbits. What you actually got in the mail when you ordered a T-9 from TSR may have even varied over time.

Another tidbit you can observe from the TSR product sheet above is the mention of existing British fantasy miniatures. That refers to the Miniature Figurines (Minifigs) line of Middle-earth miniatures, which they started advertising toward the end of 1973; they would soon rebrand these as "Mythical Earth" to avoid the ire of the Tolkien estate. TSR would partner with Minifigs in 1976 to produce a line of D&D branded miniatures, the first that would sell with D&D on their packaging, and by then any ongoing relationship with Scruby had ended. From that point forward, license agreements for D&D miniatures became a coveted commodity in the industry: TSR would award them to a variety of shops before bringing miniature production in house in 1982, when Duke Seifried was on staff and could oversee their effort. But for the oldest in old school, accept no substitutes: Jack Scruby's fantasy miniatures should have a place on any OD&D miniature player's table.

[Although the originals are hard to come by at this point, some firms today produce figures based on molds cast from these Scruby originals, as is the case with many old-school miniatures.]
Posted by Jon Peterson at 1:51 PM