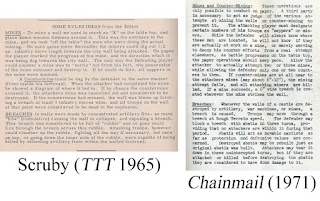 Any set of medieval rules worth their salt had some system for laying siege to fortresses. A siege system can be found on the last page of the LGTSA Medieval Miniatures rules in their 1970 Panzerfaust incarnation. But all of the action in those sieges stays above ground, involving catapults, ladders, mantlets, and the like. Chainmail incorporated those rules, which measured quantified points of damage dealt by siege weapons against fortifications, with some small modifications and expansions:

Domesday Book #5 adds only a tease that mines "are only possible when conducting campaigns." But Chainmail went on to incorporate this system for mines, countermines, and breaches to those LGTSA rules.  That this system appears as a kind of modular chunk at the end of the section, something tacked on, reminds us of how Scruby appended to the end of Chamberlin's medieval system his own rules on those three subjects, divided into two similar sections. Crucially, Scruby expected that opposing players would secretly record their mining efforts on paper and reveal the results to one another to determine the success of countermines, a clear antecedent to the system shown in Chainmail.

Chainmail, however, requires the use of a neutral third party, a judge, who would monitor the secret progress of both teams of tunnelers and inform players if and when they intersected. It is in this respect, by having a referee who keeps secret information on those underground maps, that this Chainmail system prefigures the underground adventures of Dungeons & Dragons. Or so Gygax had it: in a 1979 article in The Dragon, he asserts that Dave Arneson, who pioneered the dungeon adventure concept in his Blackmoor campaign, did so under the influence of these paragraphs of Chainmail as applied to situations from fantasy fiction. "Following Chainmail’s advice to use paper and pencil for underground activity such as mining during campaign game sieges, taking a page out of the works of Howard and Burroughs et al, he brought the focus of fantasy miniatures play to the dungeon setting.”

Given other respects in which Blackmoor demonstrates an obvious debt to Chainmail, it would be a striking coincidence if Arneson had lighted on the idea of using a neutral referee to manage underground maps completely independently of this. But the notion of using paper and pencil to keep a hidden record of secret locations has a number of other key precursors in gaming. When Ken St. Andre struggled, in the introduction to Tunnels & Trolls (1975), to explain the secret maps of Dungeons & Dragons, he could only say, "The game is played something like Battleship. The individual players cannot see the board."

For those who grew up with the plastic clamshell case and rattling pegs of the game Battleship (1967) sold by Milton Bradley, this may seem like a curious analogy. But Battleship was originally a pencil-and-paper game, which traded in the early twentieth century under names like Salvo (1931).

Salvo functioned much like the mining system of Scruby, where each player tried to guess where the other had placed secret marks on a map, effectively a piece of graph paper. You have to trust that your Salvo opponent accurately reports the scoring of hits and misses turn by turn ("B7." "Miss!"), though at the end of the battle, both sides could compare maps to detect any shenanigans. One can readily see how the pen-and-paper component of Scruby's mine and countermine system might have been inspired by Salvo -- especially given that an article on Salvo appears in a 1961 issue of Scruby's zine the War Game Digest:

Bob Mulligan had transposed Salvo into a broader naval campaign games of shipyards, factories, convoys, blockades, and fleet actions, and the basic idea behind it would inspire many such variants. We should understand Salvo as a foundational game in the development of hidden movement systems that tracked activity "off board," one that served as an obvious inspiration for Avalon Hill naval wargames like Bismarck (1962). But the fundamental idea of requiring opposing players to record secret information on a blank grid before a game begins quickly jumped out of the water and into all sorts of other applications: board games like Mind Maze (1970) repurpose the plastic clamshell of Battleship to have players design a labyrinth for opponents to explore... but games in this tradition will have to wait for another post.

Chainmail goes farther than these head-to-head contests by recommending a neutral referee keep track of enemy mines instead of the players. To find a closer antecedent for this adult supervision, we need to look to another naval wargame from the first half of the Twentieth century: Fletcher Pratt's Naval War Game (1940). Although designed for waterline ship model play on a large table or even a cleared floor, the game assigns its referee to manage underwater activities through paper and pencil for one problematic class of vessel: submarines. The Fletcher Pratt rules were well known in midwestern wargaming circles in the late 1960s, and so would be the practice of having a referee track on paper things that happen in the depths where players cannot see. There were no submarines in the Napoleonic setting of Gygax and Arneson's first collaboration, Don't Give Up the Ship, but it shows the influence of Fletcher Pratt in numerous particulars. Did it inspire the authors of Chainmail to add a judge to Scruby's system for mines and countermines? Perhaps not directly, but Fletcher Pratt is certainly part of the web of influences that surrounded the evolution of Chainmail, Blackmoor, and ultimately Dungeons & Dragons. Sometimes the best we can do is just to illuminate that web.

[Well, okay, Arneson does note a French submarine in his research notes for the Napoleonic campaign.]

Previously on Roots of Chainmail: Missile Fire in Chainmail, Courtesy of Charles Sweet