Dungeons & Dragons required the use of five polyhedral dice when it first came out, and back then in 1974, the only place TSR could acquire them was from Creative Publications. But theirs were not the first set of plastic Platonic solids marketed in America as dice. A decade before, Advertising Attractions, Inc. of New York sold the Zazz "Polyspheres" game, an invention of Fredda Sydney Sieve, which featured all five polyhedra with numbered faces. Today, we're going to look a bit at Sieve and how she came to make these plastic polyhedra.

It had not previously escaped the attention of dice fanciers that a patent filed in 1963 by a Fredda F. S. Sieve shows dice that are a dead ringer for the Zazz Polyspheres. A decisive connection between that patent and Advertising Attractions is revealed in this March 1960 newspaper article, which documented Sieve's vacation in Boca Raton. She seems to have been a true polymath with a rich life, performing piano concerts for charity when she wasn't running her own business. 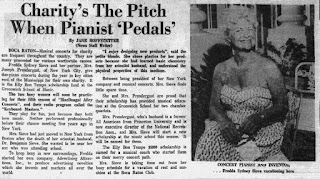 After the death of her husband in 1953, Sieve had relocated from Boston to New York City, and it was there that she founded a new company, "Advertising Attractions, Inc., to produce advertising novelties which she invents and markets all over the world." These "novelties" were mostly done in plastic: she had learned a bit of chemistry from her late husband, a scientist who did some work in pharmaceuticals. And it was largely to such companies that Sieve marketed her novelties: drug companies dispense a great deal of branded swag to doctors in order to keep them loyal customers. And so Advertising Attractions made a plastic novelty like a calendar ashtray which reminded smokers of Pfizer bestsellers of the day like Niamid and Vistaril.

The placards on that ashtray, twelve in total, could be plucked off and assembled into a dodecahedron -- which is exactly what Sieve did. These oversized dodecahedron calendars were sold as paperweights, hollow with some loose sand inside to make them stay put. Sieve patented them in 1956, and sold a branded Squibb calendar in this form factor that year; other examples as late as 1970 survive. 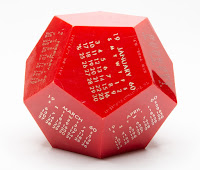 Perhaps it was work on these huge d12s that got Sieve interested in developing plastic polyhedra as numbered dice rather than as calendars. The Zazz Polyspheres, as sold in 1963, were intended for play in a point-scoring game where players took turns rolling the dice, tabulating their totals according to a formula given in the rule sheet folded into the dice case. Aside from the d6, the Polysphere faces were hand-numbered, not molded onto the dice, which suggests that the polyhedra themselves might not have been manufactured with the intention to use them as dice, but were later repurposed by Sieve for her game. Most notably for D&D fans, her early d20 was numbered 1-20, rather than 0-9. 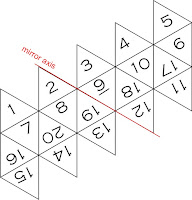 (Which is, incidentally, one of the more elegant d20 maps you'll see.)

Perhaps the weightiest question about the Zazz Polyspheres is whether they have any connection to the Creative Publications dice that would come on the market in the early 1970s. The short answer is, probably not, though you can never rule out an indirect influence. But it is interesting to note that the Zazz d6 is stamped with a Hong Kong manufacturers mark, and Creative Publications would later have their dice made there as well. The Polyspheres are also of roughly the same size as the later Creative Publications dice, though of course those later d20s would be numbered 0-9, which makes the Zazz set an attractive collectible for D&D fans. Even though the early D&D community seemed to be totally unaware of the Zazz dice, you could roll them in a dungeon adventure today -- though her d4, with only one number per face, would require its own rule (maybe that the face that lands down is the result of your roll?).