A brief note on scope: this list is restricted to polyhedral dice that were known and available to the hobby gaming community of the 1970s, which basically means that information on how to order them could be found in zines and catalogs of that period. Other numbered polyhedra overlooked by the hobby wargaming/RPG community (such as Zazz Polyspheres) are not included here, as well as unmarked polyhedra not marketed as dice (such as the Edmund Scientific set). Note as well that this reflects research I consider to be stable, but these are difficult objects to study, and there are still open questions that might nudge these conclusions one way or another.
[Making a few periodic additions to this post since the original, including: Zocchi 1979 gem dice; Koplow dice; 1980 "monster d6s.] 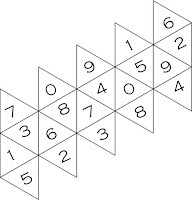 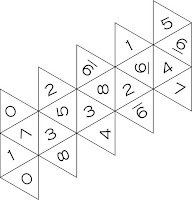 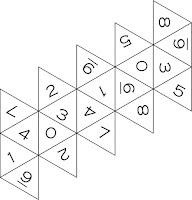 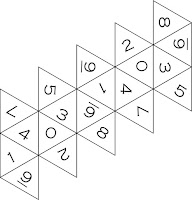 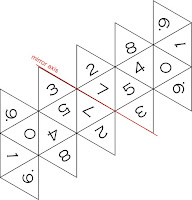 Initial release in ivory, white and black, with other colors soon added. The Koplow d20 was the first "tumbled" (rounded, glazed edge) polyhedron made for hobby gaming. Manufactured in West Germany. Note the striking Koplow pipped d8, also available in 1980. At first, these two were the only solids Koplow made apart from traditional d6s; a set of five polyhedra was available by 1982, and six (adding a d10) in 1983. 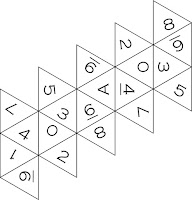