In cataloging the polyhedral dice available to early gamers, we shouldn't neglect a few products that weren't marketed as dice at all. In the 1960s, educational supply companies made models of the regular polyhedra available for classroom use, like the classic Edmund Scientific set shown above. Although they are unnumbered, a flick of the pen (or marker) might fix that. The question is, how well would they have served as dice?

Unmarked plastic polyhedra could be found for sale in the Edmund Scientific Catalog for 1966, which shows them packaged in a set with a variety of other non-Platonic geometric shapes, though the Regular Polyhedron set could also be purchased separately for $2.50: 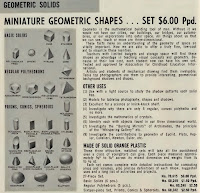 We may note that among the suggested uses of these solids, dice are not mentioned. But since they are Platonic solids made from "solid orange plastic," they should be able to roll fairly while keeping their edges; they promise to "take all the punishment even a class of youngsters can give." Considering them as dice, the Edmund Scientific octahedron is a bit smaller than later polyhedra sold as dice, and the tetrahedron is noticeably larger. As a size comparison, here's what they look like next to the Creative Publications polyhedral set:

The Zazz polyspheres from 1963 demonstrate that you could take simple plastic molds of the Platonic solids and turn them into dice: only the d6 in that set has molded numerals, the remainder are all hand-inked. And indeed it is not unheard of today for manufacturers like Chessex and Koplow to sell blank polyhedra as dice to be inked by gamers in whichever fiendish way they see fit:

When it comes to the Edmund Scientific dice, the plastic is so polished and reflective that you might have been hard pressed to find a suitable marker for them. Also, international safety orange is perhaps not the most versatile color as a backdrop for inking. And in order to use the tetrahedron as a die, you would need to solve the d4 problem. But the Edmund Scientific polyhedra might well have been the first polyhedral dice that some gamers rolled.