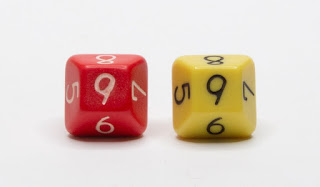 Scouring through the polyhedral dice available to early gamers, you can sometimes stumble across a peculiar looking ten-sided die numbered 0 through 9. While these are obscure dice in America, they are well known in Japan, where they were included in an elementary school toolkit called a "Sansuu Setto" (さんすうセット, or  算数セット), which just means "arithmetic set." Today, let's unbox a Sansu Set, and look at a few variations on the d10s you can find within.

The Sansu Set d10 is a truncated octahedron used to help children learn counting as well as basic addition and subtraction. Japanese arithmetic sets have a rich history -- they apparently go back to 1940s, and even some pre-war examples survive, though those early sets relied on six-sided dice. The dice shown above come from a Sansu Set manufactured by Aoba, which shipped as an adorable box: 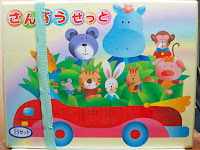 Inside, you can find a variety of small plastic containers with everything you might need to master math: 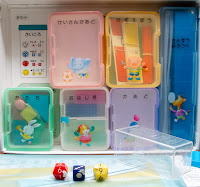 Note that the sheet of paper on the bottom of the box introduces these red and yellow d10s. Each die even has a little sticker attached when you first open a new set. A number of companies would go on to make d10s in this style, and you can find examples beyond yellow and red in blue, green, black, and white. Some variations put bars under the "6" and "9" to help differentiate them: 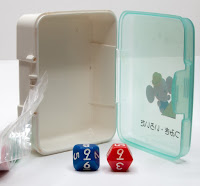 Truncated octahedrons don't roll particularly well, and it's a bit of a puzzler why these sets didn't use something more along the lines of the Japanese Standards Association dice. But a great many manufacturers worldwide have made similar truncated pyramid d10s over the years: in the wargaming community, Lou Zocchi proposed constructing a d10 this way as far back as May 1971:

It's a little beyond my ken to propose any dates for the various incarnations of the Sansu Set -- the example I show above seems to be from the 1980s -- though I'd appreciate any insights from readers who know more about Japan than I do. The dice were also sold separately, for example, as Dr. Kobayashi's "Thinking Play" (考える遊び) ten-sided dice. Sansu Sets with these dice are very common on the secondary market in Japan, and although sets continue to be manufactured today, more recent sets do not carry these peculiar d10s. You are more likely to find in them a d12 which has both a "0" and a "10", as well as two "5"'s:

Another variation still in production today for educational purposes is these truncated dodecahedrons numbered "1" to "10", with two very small faces labeled "0" and "∞":

Now what game systems might you try to build with those dice...
Posted by Jon Peterson at 3:22 PM