Everything leaves a trace. That's been my guiding principle researching the history of early wargames and role-playing games: any commercial product that survives, no matter how obscure, had to be available somewhere and somehow, and that means a paper trail. All too often the products themselves give us little indication of when they were made, as was the case with today's subject, Monsters! Monsters! Monsters! Galore. But with the help of distributor catalogs, we can show how it became available in 1980.

Plenty of copies of this booklet survive. It's in the collection of the Strong, and has been attested on the sorts of sites that track obscure RPG supplements. But although the game is attributed to Raymond Robertson and Clifford Robertson, it offers no indication of when it was published: Heroic Worlds can only give a one-sentence take on the booklet with the postscript "no publisher or date listed." The Foreword to the book at least explains that Raymond and Clifford are brothers.

The Robertson brothers filled the book with seventy or so creatures of their own invention, though many are slight variants on familiar D&D monsters. There was a small tradition of creature compendiums of this kind in the 1970s, from famous ones like All the Worlds' Monsters to very obscure ones like The Observers Book of Monsters. We can tell from the format of monster statistics that the Robertson brothers' book likely appeared after the official Monster Manual, so sometime after 1977. 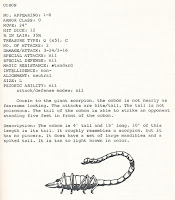 But you don't see this small press offering advertised in the zines of the day - something self-published on this scale didn't have an advertising budget. Yet there must have been some way that copies came down to posterity. And we can indeed find a tiny trace of it in Lou Zocchi's Hex-o-Gram #15, from June 1980:

Catalogs like Zocchi's provide a unique source of illumination on the difficult small-press period of the late 1970s and early 1980s. Early on, Zocchi distributed games through D. Housman Associates, but he branched out with his own Catalog which, as of issue #3, began to advertise the availability of Dungeons & Dragons and of course its polyhedral dice. As Zocchi aimed to produce new issues of the Catalog annually, he supplemented the Catalog with short addenda called Scout, the first of which appeared after Catalog #3. Scout #1 announces the availability of Greyhawk as a new title, and Scout #3 (supplementing Zocchi's Catalog #4) and has under "New Games" titles like Eldritch Wizardry and Gods, Demi-gods and Heroes. By 1979, Zocchi had replaced Scout with Hex-o-Gram, which notes below its masthead that it appears pretty irregularly - perhaps on average, they showed up every six weeks or so. 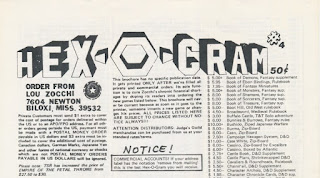 Hex-o-Gram usually gave a blurb about any new addition to Zocchi's stock. And thus we can spot Monsters! Monsters! Monsters! Galore for sale in Hex-o-Gram #15. Its notice would later be repeated in Zocchi's fall 1980 Catalog. Zocchi became a strong advocate for small press and self-published games, and was always willing to stock a few copies of even the most obscure games.

Zocchi wasn't the only one dedicated to regular updates on new RPG releases. Walter Luc Haas, who is best known for his Europa newsletter, ran a small distribution business that made American games available in Europe. His Cheesehole News began as an appendix to Europa, but eventually split out into an independent catalog zine. Haas's inventory lagged a few months behind American releases, necessarily: the update for the autumn of 1980 shows Monsters! Monsters! Monsters! Galore, though the item hasn't been priced yet: 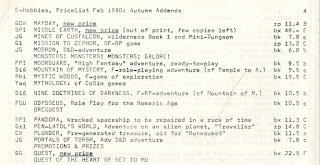 It is catalogs like these, issued on a monthly or bimonthly basis, that make it even remotely possible to date some of the more obscure titles that emerged from the initial rush of creative energy after the release of Dungeons & Dragons. Even when a copyright date is asserted in a product, it can sometimes be misleading. But when distributors listed items in stock, we know they were in the wild, and they had a chance of making it to hobby shops or directly into the hands of consumers. These catalogs are well worth studying for anyone trying to make sense of the period.