A History of Hero Points: Fame, Fortune and Fate

"Hero Points" was the name given by James Bond 007 (1983) to a quantified resource players could expend to alter the results of a particular system resolution. It built on an earlier innovation in the pioneering espionage RPG Top Secret (1980), which introduced "Fortune Points" and "Fame Points" in lieu of D&D saving throws. Over time, this idea took manifold forms in RPGs that followed, from Fudge and Fate Points to Artha in Burning Wheel to Inspiration in D&D 5th edition. Today, we'll look at how this system innovation took shape, beginning with Merle Rasmussen's original pitch for Top Secret, shown in this design letter above.

There's a lot to unpack in the page from Rasmussen's letter shown above (the last sentence ends on the next page with the word "known", by the by), but there are three crucial things to take away from it:

For 1978, Fame and Fortune Points were pretty radical ideas. But ideas rarely pop up in only one place: similar mechanisms can be found in games like Commando (1979) with its "Miraculous Escapes" which can be invoked by heroes once per mission, and in the ability of a "Protagonisti"-level character to redo incoming damage rolls "not to his liking" in (the Return of) Once Upon a Time in the West (1979). Both of those, however, still had a chance the hero would take the damages -- unlike Rasmussen's points. Rasmussen allowed a player to use points to simply override a die roll, a power that previously resided only with a referee concealing rolls behind a screen. System evolutions that granted players more control over executing the system are a major thread that The Elusive Shift follows in late 1970s design.

Fame and Fortune Points were essentially reactive, like D&D saving throws: undoing negative effects targeting a character. But by this point, saving throws in some RPG designs had begun to move beyond the merely reactive and into the realm of the proactive. This was a feature of the Tyr role-playing games like Space Quest (1977) and Bushido (1978). Space Quest, for example, describes a saving throw as something that "may be applied positively, to do something (feat of strength, burst of speed), or negatively, to avoid some damage."

The concept of players expending points to either offset a damaging effect or to preemptively improve performance can be found after Top Secret in Pirates & Plunder (1982), which grants players a pool of "Lucky Breaks" which can be expended either reactively or proactively: as a reactive way to fudge an undesired die result, or as "Adrenaline," a proactive way to boost an ability temporarily during a crisis situation. By 1982, when Top Secret had enjoyed some time to sink in to the melting plot of tabletop play, you could also find gaming groups adapting it out of its original context, like this report from Robert Kern:

What is novel in the Hero Points that Kern describes is how they are awarded: GM's gave them out for "heroic deeds," and to his knowledge, you could only have one at a time. Kern neglects to mention that his group was in fact made up of Victory Games staffers who were currently working on James Bond 007 (for which Kern received credits here and there). JB007 has a concept of Fame Points, but they have any entirely different system function than those of Top Secret -- instead, JB007 awards its players Hero Points.

In JB007, these Hero Points are awarded whenever a player rolls the best outcome on skill checks, or for such actions as "successfully completing a mission or coming up with an ingenious escape from a trap." Some GMs might want to limit players to holding four or five Hero Points, but for exceptional characters, it might make sense to allow reservoirs of up to twenty. Characters expend them to adjust the outcome of rolls "immediately after determining the results," and can spend multiple Hero Points to dramatically shift the result of a system check. So in JB007, Hero Points have a more dynamic economy than Rasmussen envisioned for Top Secret, where a small reserve of Fortune Points are allotted at character creation and Fame Points come only gradually with progression.

Inevitably, once an economy of Hero Points became an element of play, gamemasters would begin to repurpose them as a reward system. In much the same way that some 1970s RPGs fostered role-playing by linking experience rewards to proper in-character behavior (the aforementioned Bushido is one example), by 1984, we can see reports of GMs awarding Hero Points to encourage role playing, as in this description from Martin Wixtead: 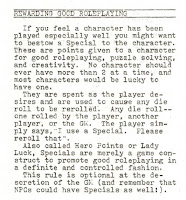 That text would be substantially repeated in Wixtead's Year of the Phoenix (1986), though its version goes on to explain that the "Specials" rule is optional in part because "some players feel that using Specials is a way of cheating the game's reality." Hero Points did have their critics, who felt that a meta-game power yanked players out of character, but to those designers who hoped to grant players more "narrative control," Hero Points have proven quite attractive "as a game construct to promote good roleplaying in a definite and controlled fashion." In retrospect, Rasmussen's player-control point system cast a long shadow, sparking one of the most influential design innovations in the history of role-playing games.