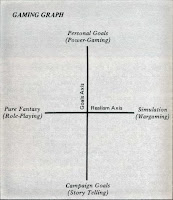 One of the threads that The Elusive Shift follows is the development of typologies that sorted players, or sometimes game designs or playstyles, into categories that reflect what kind of experience people want to have when they sit down to game. These form a significant component of contemporary RPG theory. I myself was surprised, doing research for the book, to discover threefold model typologies already discussed in the wargame community years before Dungeons & Dragons came out. In these early discussions, we can see the roots of much of the RPG theorizing that would follow, like the classic fourfold Blacow model, shown in a later visualization above.

Whenever a group of people around tabletop plays a game, participants may have conflicting approaches to play. Early wargamers had long observed a trade-off in game design between realism (attempting to design systems that simulated real conflicts with as much detail as possible) and playability (the countervailing drive to build systems that are simple and unambiguously executed), and it wasn't long before they observed the potential for tensions in play between people who prized one goal over the other. By the beginning of 1971, Steven Thornton had perceived that there was more nuance to this than a simple dichotomy:

Thornton saw three categories of wargames: "simulators" who are obsessed with realism; "competitors" who engage in endless rules lawyering for the sake of securing victory; and then the mainstream of "fun" wargamers who are doing this casually "just for enjoyment." Thornton had learned already of the "ill-feeling" that extremist views could cause, and that these could be a threat to the very hobby. Nor did Thornton's words fall of deaf ears: they would be picked up by Fred Vietmeyer a year later:

But Vietmeyer has a more pluralist view of this typology, arguing against what would later be called a "One True Way", as "for one type of player to place his own viewpoint as superior to another's hobby enjoyment is simply being too egotistical." Some players might want to invest hours in painting meticulously researched miniature flags and uniforms for the sake of realism; others might find that "a waste of time."  Vietmeyer would return to this theme in another article in The Courier two years later, right at the time that Dungeons & Dragons hit the shelves.

The release of D&D drew another community into dialog with wargamers: science-fiction and fantasy fans. Their presence and incentives upset the traditional typologies of the wargaming community, to the point where people began to see a new type that had come to the table: story focused-gamers. As Lewis Pulsipher wrote in 1977:

Pulsipher sees a distinction between those who wanted to play D&D "as a game" and "those who want to play it as a fantasy novel." His "D&D Philosophy" is very concerned about the lack of agency that players might experience when a game session is too tightly pegged to a narrative, so that "the player is a passive receptor, with little control over what happens." But many in science-fiction fandom sought a way to engage with stories through RPGs that would strike a balance between a game experience and the high drama of fantasy literature.

By 1980, Glenn Blacow had developed his famous fourfold model, which retained the traditional wargame/simulation type, the power-gaming/competition type (originally Blacow called it "ego-tripping"), but introduced in place of Thornton's "fun" wargamer two new categories: role-playing and storytelling. A contemporaneous visualization of it is shown at the header above. Blacow saw the "interaction of these four elements" as determining the "feel" of the game.

Blacow knew well that these "forms" all manifested to some degree in any tabletop RPG, it was really a matter of which dominated, and how much of each was necessary to give a particular player a satisfactory experience -- perhaps the definitive refutation of a "One True Way". His model immediately revolutionized the way people talked about RPGs in the fanzines of the day, which were the closest thing people had at the time to Internet discussion forums.

Various corollaries or extensions of Blacow's model appeared through the 1980s (including the visualization above, from Different Worlds, which shows some forms as mutually-exclusive). By the time the Internet came into its own, and those ideas moved onto forums like Usenet, we can see the "threefold model" of gamist, simulationist, and dramatist (or narrativist) agendas begin to take hold. These would be recontextualized by the Forge in the GNS model. But The Elusive Shift shows this RPG theorizing as existing in a continuum that predates D&D, which was steered by the messy reconciliation of traditional wargamers with the new story-focused gamers who entered the hobby from science-fiction fandom. Typologies like this demonstrate why it is impossible to develop the perfect RPG -- the tension between the "forms", however, has fueled tremendous creativity in RPG design for the past four decades.