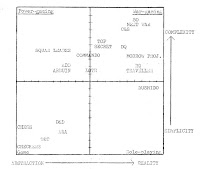 Dungeons & Dragons started out as a game with such an adaptable and open-ended set of rules that early adopters questioned whether any further published RPG systems were even necessary: DMs could make D&D into anything they wanted it to be, after all. But once the Blacow model took hold, and people began to understand system design through its lens, more attention was paid to how different designs could potentially yield results for players aligned to Blacow's "forms" (wargaming, role-playing, power-gaming, and storytelling). These would become the earliest arguments that system does matter, understood in frameworks like Donald W. Miller's typology of RPGs and wargames shown above.

By 1977, the first crop of self-identified role-playing games had reached gamers, and many players began running campaigns with systems like Traveller and Chivalry & Sorcery instead of D&D. But almost immediately, people started to question the impact that other systems would have on the nascent role-playing hobby. In The Wild Hunt, Jim Thomas spoke to the chances that Chivalry & Sorcery would move the needle with considerable skepticism:

This ultimately led Thomas to conclude, "I don't think new games/rules are going to make much of a difference in the long run." Arguments along these lines were understandably frustrating to budding RPG designers -- and perhaps none were so frustrated by it as Ed Simbalist, co-designer of Chivalry & Sorcery. Simbalist viewed the open-endedness of D&D as a pernicious myth that perpetuated the game's dominance.

Simbalist believed that "because D&D was the first set of popular role-playing rules, it became the game to which most players were exposed," and that "most players' concepts of role-playing have been conditioned by this popular set of rules." This was unfortunate because, to him, the D&D system was geared primarily toward dungeon adventuring, and if a particular D&D game had any greater depth, it was the players who "created the systems necessary to give that world some semblance of realism and consistency" and "probably with little or no help from the rules" as published.

Simbalist's contention that the first RPG system you played would "condition" how you approached other systems in the future would become a longstanding principle of RPG theory, but it wasn't until the Blacow model that it would truly come into its own. Donald W. Miller's 1981 essay "Theory on FRP", published in his "Journal of Aesthetical Simulation" (as distributed in A&E #74), advanced the theory that a given player's "style of play may be permanently prejudiced by their first introduction to FRP."

Miller, as shown in his graph above, charted system designs across four "constructs," on a continuum between abstraction to reality on the x axis, and then simplicity to complexity on the y axis. He incorporated the Blacow forms to "help the reader understand what the dynamics of the constructs will tend to produce," how, for example, "complex and realistic games will motivate players to wargame." (His model does not contain a category for Blacow's "storytelling" form because Miller was focusing on player outcomes, and considered storytelling a function of the DM.)

Miller's connection between design choices and the Blacow forms marked a point of maturity in the evolution of RPG theory. Like the Blacow forms themselves, this theory would be iterated upon ceaselessly, by Miller himself and many others. The tagline "system does matter" would later become the subject of an influential essay by Ron Edwards, and his notion that exposure to a seminal system could "condition" players would itself trigger a famous controversy. Edwards saw these design choices through the lens of the GNS model, but probably any such model would lead designers and players to the conclusion that, as Simbalist put it, a "game's underlying philosophy affects everything that the game's systems do or fail to do."