Pickens's account is broadly corroborated by Bob Blake in Dragon #19, "Each team but one ran into a horrible encounter with a demon and died." Blake also confirms that "we used Advanced D&D modules D2 and D3 for the scenario," so it would make sense that the beginning of D3 would be in the second round of three.

As described in the published D3, a permanent illusion had been cast over the area where Silussa poses as a statue, which makes the place appear like a wholesome and welcoming garden. The description doesn't mention anything about an abyss surrounding Silussa, but it does say her room is depicted in encounter piece VIII, which looks like this: 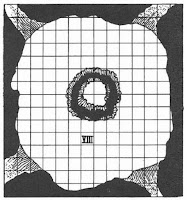 ... and the description does indeed mention the "island-like center of the cavern." So, are we supposed to run this room as if Silussa is "separated from the party by a 200' abyss" obscured by an illusion as Pickens relayed? It would be a strange thing to omit from the room description. More likely the abyss, which dealt 70 points of falling damage and required 9 rounds for survivors (if any) to scale, was somewhat hastily excised due to its excessive lethality, and what we see in the published version are a few leftover traces of it.

Back to GenCon 1978: what happens in a tournament when you have a sole-survivor winning party, but need to award second and third place? It turns out that the leading contenders for those slots were theoretically resurrected, and run through the charming situation of round three: the city of Erelhei-Cinlu. Pickens watched Russ Stambaugh make quick work of one of these runner-up groups: