As another anniversary of the birth of Dungeons & Dragons passes, let's look back 48 years to the heady days of 1974, when the idea of dungeon adventuring had only just started to capture the imagination of gamers at large. Alistair MacIntyre had long run "Operation Contact" for the International Federation of Wargaming, so he knew everyone and viewed the release of D&D with some interest -- though he confessed, "I don't have the time or knowledge of fantasy to participate in your underground adventures." He was however "fascinated by the dungeon mazes," and came up with a number of devious dungeon layouts that he photocopied and shared directly with Gary Gygax and others that summer of 1974. Above you can see a dungeon entrance from the wilderness that MacIntyre proposed -- and at the bottom of the cut below, there's a little trick from Gary himself as well.

MacIntyre envisioned a number of very elaborate mechanisms for duping unwary adventurers, including this two-page description of the diabolical "three-way place," a series of connecting doors that mask intersections, making it nearly impossible for adventurers to retrace their steps -- or to avoid being steered towards a waiting monster: 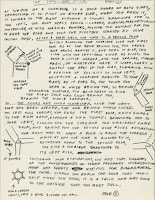 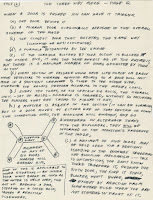 Anticipating the trend of "fun-house" dungeons, MacIntyre offered a grab bag of mirrors, rotating disks, and pivoting doors that would surely prove baffling to anyone trying to navigate an underworld: 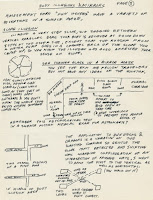 You can also find in his notes a few insights on how monsters might repopulate a dungeon after an adventuring party leaves survivors behind (and note his reference to Outdoor Survival as the inspiration for wandering monsters):

Precious little survives from the first year that D&D hit the market, and while MacIntyre's design concepts do not constitute a complete dungeon, that are a great example of the creativity that dungeon adventuring triggered in the minds of the earliest adopters almost fifty years ago. In light of them, maybe the Tomb of Horrors doesn't look so bad -- but that doesn't mean its designer wasn't thinking along these lines. From early 1974, here for example is a similar scribble from Gary Gygax's notes, showing how to confuse players about which dungeon level they occupied: