E'a, Chronicles of a Dying World

David M. Fitzgerald's E'a: Chronicles of a Dying World is one of the more obscure digest-sized unofficial supplements to early D&D, little known even in the community of its day. E'a did warrant a blurb in Heroic Worlds (1991), and now even has an RPGGeek entry, so it cannot be considered entirely forgotten, but very few were printed. As with many small-press items of this era, trusting the 1979 copyright date inside the book is risky at best -- but through equally-obscure catalogs, it is possible to establish roughly when it became available.

E'a has forty-seven numbered pages, in which it details an Arduin-like grab-bag of new system elements: classes, spells and monsters; mechanics for critical hits and fumbles; a write-up of comeliness as a D&D ability; that sort of thing. It also features quite a few illustrations by Brian Nolen, including some humorous ones reminiscent of Will McLean's Dungeon Masters Guide cartoons: 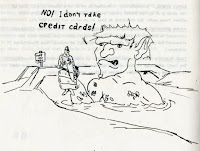 As with many small press RPGs, the makers of E'a could not afford to advertise it broadly. My copy was sold at Hobby Castle in Merced, California, near the author's home town of Atwater, and probably most of the initial stock traded over the counter locally. Eventually, Fitzgerald did start his own fanzine, called Game Oracle, and in the pages of its first issue, you can find an advertisement for E'a: 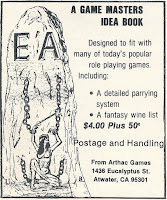 The problem is that Game Oracle did not start publication until 1982. And it is not unheard of for early games to assert a copyright date long before their actual publication (like Crimson Cutlass, which circulated in draft form in 1979, but would not see a commercial print edition until 1989). So is there any good reason to think that E'a was available anywhere near its asserted date of copyright? As usual, the best sources for this are contemporary catalogs. The 1980 Gamescience catalog makes no mention of E'a, but in Walter Luc Haas's Cheeshole News issue #62-3, we can find a notice of its availability:

These are autumn additions to Haas's 1980 inventory, but given that Haas, who was based in Basel, Switzerland, typically couldn't stock games until some months after they became available in the USA, this listing provides a credible reason to think E'a was out for sale by early 1980, which makes the 1979 copyright date look plausible enough (I went with it in The Elusive Shift). But just because it was out there doesn't mean it was widely known: according to the author, only around 400 copies of the book were printed (see his comments on Tome of Treasures), few enough that in the copies I've seen, the afterword at the end was personally signed by the author. So, like Mythrules, is not exactly a game that is noteworthy for its influence on posterity so much as for exemplifying how the early RPG community made the game its own.