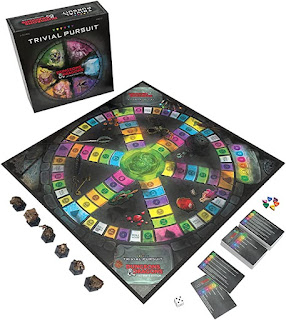 Of all the things that I never imagined I would end up working on, I was asked to help put together the Trivial Pursuit D&D edition, which has just been released. It is, well, Trivial Pursuit, but with D&D-specific questions: on monsters, spells, campaigns, characters, and of course the game's fifty-year history. If that sounds like something you'd be interested in, you can find it at the usual places online and in person -- my FLGS just got it in this weekend.

Although the "special thanks" on the rules page credits only me for the questions and answers, in fact I had a lot of help -- including from Trivial Pursuit fans on Wizards of the Coast staff, and certain unsung heroes, though I'll leave it to any of those folks to out themselves about their contributions. You can play as the mind flayer, beholder, mimic, gelatinous cube, owlbear, or demilich. I think that sets about the right tone.

Just to give a sense of what's inside, the six categories of questions are:

... though of course there's a lot of overlap between these categories, and a lot of questions really could have appeared in more than one. I don't want to drop any spoilers, but I hope it succeeds in the goal of having a mix of easy, medium, and hard questions. It also tries to give a fair balance of questions about the present and past of the game, so it is hopefully as accessible to those started decades ago as to relative newcomers. Obviously, you'll have an advantage if you are well versed in all eras of D&D.
This is not the first D&D trivia game by any means. Long-time fans may recall the AD&D 2E Trivia Game (1991), a board game that certainly taps into the successful market Trivial Pursuit created in the mid-1980s. And you would occasionally see trivia questions published in the Dragon, as with the AD&D trivia in the January 1986 issue, or the more sprawling Triviathlon: The Arcane Challenge (1996) competition that shipped with issue #227. But a lot has happened since then, and it was definitely a fun project to work on as we get ever closer to D&D's fiftieth anniversary.
Best of luck to those who play it!
Posted by Jon Peterson at 11:14 AM