There was little mainstream press dedicated to Dungeons & Dragons before the calamitous summer of 1979, and virtually none prior to 1977. This particular article by Mike Duffy is from the Detroit Free Press, from August 17, 1976, and it introduces us to D&D through the legendary Ryth campaign conducted by the Metro Detroit Gamers. It does a good job of explaining how D&D captivated early fans: as one put it, "All you can think about is the game."

A few details not to miss:

Paul J. Wood's last name here is misspelled "Woods." The fellow shown behind him to the right is Mike Bartnikowski, legendary Gen Con auctioneer of the early days and editor of the Deck of Many Things fanzine, among other things. The two could also be spotted together again at the Avalon Hill booth at GenCon XI in 1978, say. 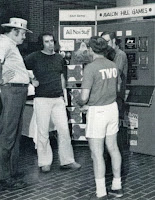 Duffy mentions the upcoming MDG onvention in late November or early December 1976: that would be WinterCon V, where famously Gary Gygax would run the Lost Caverns of Tsojconth tournament, later revised as module S4 (and retitled as "Tsojcanth"). The following year, MDG would host the Origins convention, which attracted a larger crowd than the Gen Con held a month later.

The Ryth campaign's chronicle was one of the earliest circulating D&D fanzines, as its first issue predates even the debut of Alarums & Excursions. It was by the summer of 1976 a campaign with no less than six dungeons run by different participants. Some enterprising soul took it upon themselves to scan the issues of Ryth and put them on line. However, the first page of that PDF isn't actually from the Ryth Chronicle, but instead from the March 1975 issue of the Yggdrasil Chronicle (#45), an MDG Diplomacy fanzine. As you can't really make out the city map of Rythlondar on the reverse page, I'll reproduce it here. Note that it differs in some particulars from the later map shown on page 56 of the PDF. 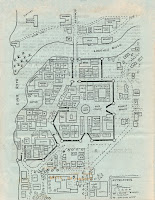 The name of Wood's character "Fazzle" will be familiar to fans of the Quest for the Fazzlewood (1978), an early solo tournament module for WinterCon VII designed by John van De Graaf, gamemaster of the Ryth campaign, with his wife Laurie. It was later republished as module O1. Bartnikowski, incidentally, played a cleric in Ryth named "Brother Bung."

This article dates from the heyday of OD&D, after the printing of the supplements but before the unveiling of Holmes Basic, so it is early enough that the term "role-playing game" hasn't quite caught on. We hear it only when Wood is "mixing his role-playing personal pronouns" and speaking from the perspective of his character. Instead the article contrasts this new-fangled "fantasy gaming" with traditional wargames.

Although Duffy does not spell "orc" as we would, you would be hard-pressed to find an earlier mainstream press mention of displacer beasts or umber hulks. Many early journalists had trouble comprehending the D&D game, but Duffy fares pretty well, especially in how he faithfully relates that the original published system was really just guidelines. As he summarizes, "Essentially, what you get is a rule book, and the players wing it from there -- modifying rules and adapting as they go along."
Posted by Jon Peterson at 4:29 PM