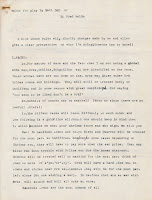 Sometimes, for whatever reason, you can't get together with your Dungeons & Dragons group in person. Long before D&D came out in 1974, people had used the mail to play games like chess or Diplomacy, even when conquering outer space. So, in the first two years of D&D's existence, a time over which only a few thousand copies of the game had sold, scattered early adopters began to play D&D by post. Of course, given the dynamic, immediate experience of D&D, this is easier said than done, but nonetheless these activities were a significant component in how the fan community first approached this new game -- that is to say, with a certain amount of social distancing.

Probably the best overview of the first wave of play-by-mail Dungeons & Dragons was given by Jim Cooper in Impassable #59, from December 1975. At the time, Cooper knew of around ten postal D&D efforts underway: 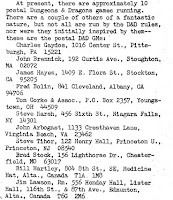 ... though he included campaigns like Steve Tihor's 1975 Endore game, primarily a face-to-face affair in New York and Princeton, which proposed a postal dimension as described in Haven Herald #3. But Tihor has to admit the problem inherent in any postal adaptation: "an average expedition will take about as much time as a game of Diplomacy" -- and bear in mind that postal Diplomacy games could take years to resolve. 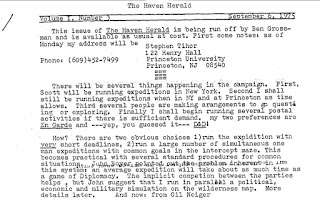 Cooper believed that Jim Lawson started the first play-by-mail D&D game, the world of Fantasia. The first issue of his Fantasia zine (soon retitled Fantasia Today) was postmarked January 6, 1975, which indeed makes it a good candidate for being the earliest zine dedicated to a D&D campaign. Lawson, a veteran of prior Midgard games, solved the play-by-mail problem by fusing D&D with Midgard: as a result, in addition to allowing a "Hero-Type," a "Wizard-Type", and a "Cleric-Type," Fantasia also let players adopt a "Ruler-type." Among those who quickly signed up to play as a "Ruler-Type" was one Brian Blume. Lawson's campaign also included a few people closer to home such as Bill Hartley, another name mentioned in Cooper's list. 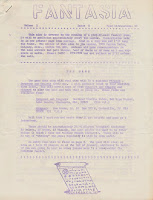 Cooper identifies Charles Gaydos's approach as the "first authentic D&D PBM game; no Rulers anywhere." Gaydos can be found advertising his modest effort in the July 1975 issue of Wargamer's Information:

In the very next issue, he hastened to report, "I have more than enough players now," but this just encouraged others to pick up the slack: in the October issue of that zine, Jim Hayes proposed to run his own play-by-mail campaign following Gaydos's model. Tom Corke, part of the Youngstown Diplomacy posse, got the word out for his own campaign, and its associated zine The Westron, through venues like the Quick Quincey Gazette:

An East Bay Diplomacy fan named Fred Bolin started his own play-by-mail D&D campaign that, as Cooper notes, borrows "from the latest masterpiece from TSR: Empire of the Petal Throne." The most direct of these borrowings is a profession system, which Bolin adapts to the various fantasy races he included: so elves, dwarves, and hobbits say, could not be slavers, but dwarves excelled as goldsmiths. His postal approach to dungeon exploration focuses on giving general orders for the party that would be followed until conditions arise that require more input from the player. 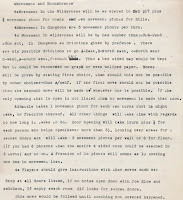 Collectively, these early play-by-mail dungeonmasters constitute quite a few of the names in TSR's Strategic Review lists of DMs; you can see Brad Stock's play-by-mail campaign given its own plug in the February issue (Steve Marsh was already "Contributing S&S Editor" for the magazine then). Those interested in Stock's Geu-Ramysh campaign can read a little blurb from Bill Seligman about it in Alarums #16. One of the other players in Stock's campaign was Stewart Levin, who would go on to start the Roskild-Skaar campaign in 1976, which based its postal component on the Kam-pain rules which had previously fueled Midgard Ltd. 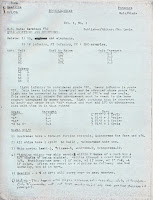 Even in 1976, as D&D headed towards ever greater popularity, play-by-mail variants would continue to exert an influence over the community. This was the era of postal games like the Pits of Cil (see the nine-page rulebook here). It would not be long before these efforts became more ambitious, and people imagined ways -- such as the Loera campaign -- they might incorporate massive number of players into a world united by the post. The intrinsic limitations of playing by mail meant these efforts grew more marginal over time; it seems unlikely D&D would have reached the pinnacle of its success had it been confined to envelopes. But the determined few who could only play at a distance felt the game was worth the trouble. In retrospect, this offers us a bit of needed perspective: with our Internet, Zoom, Discord, Roll20, and so on, we've got it easy.
Posted by Jon Peterson at 1:27 PM