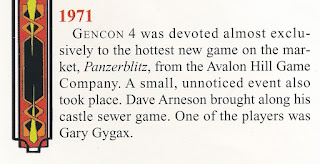 
On August 23 and 24, 1971, Gen Con IV was held at the American Legion Hall in Lake Geneva, the first year that the convention was not based at the Horticultural Hall (which hosted an antiques show that weekend). Contemporary reports suggest that the Legion Hall was hot and crowded, especially after some 250 gamers crammed themselves into the two floors of the building. The main and second floors were reserved for gaming, including the Panzerblitz tournament mentioned in the history above; dealers were relegated to the basement, next to the bathrooms, in a decidedly miserable dungeon layout.

Don Greenwood of Panzerfaust attended the convention and reported "fantasy games utilizing Giants and Goblins drawing particular interest," which is to be expected as Gygax evangelized his new game Chainmail. But Greenwood identified the "most intriguing" game on display "was a village set up for WWII using 2 second rules."

It was a refereed game where a "judge" managed positions of individual troops in the village: that combined with the Second World War setting and a miniatures system where one move equals two seconds of real time suggests it was Korns's Modern War in Miniature. Korns was on the planned event list for Gen Con IV; Mike Carr was supposed to be judging "a small scale infantry action" using Korns on Sunday.

The most intriguing aspect of the setup that Greenwood mentions was that the houses had removable floors, and "a system of sewers underran the table." It is this aspect of the game that is mentioned by all of the reports on Gen Con IV that I can find: John Mansfield in Signal called this setup "the most popular game of the Con," describing it as "a small village clearing game in miniatures" and mentioning how "the roads even had sewers."

A highly abbreviated note from Gary Gygax in Gamers Guide gives us a bit more detail: that it was "a 'town' about 4.5' x 4.5' for WWII street fighting. The town had full buildings which lifted to reveal basements and sewers below - manholes in the street opened." Surely those "sewers" wouldn't have been mentioned by everyone who saw the game if they hadn't seen use during play. So it seems that during the 1971 Gen Con there was a battle involving the sewers -- just not a fantasy one. The reports don't say if the WWII village included something like a castle... but it wouldn't have been out of place for certain period settings in Europe.

So could Mike Carr have brought this elaborate display down from the Twin Cities to run as a Korns game? Gygax tells us otherwise, as he attributes the town setup to the St. Louis Chapter of the IFW. None of the reports mention who judged the game, though, and it is at least possible that someone other than the usual St. Louis crowd (the likes of Oliver Wischmeyer and Mark Jumper) did so over the course of the convention.

But all this does suggest that some half-forgotten fragment of Gen Con lore was preserved in TSR's 20th Anniversary chronology, the idea that an individual-scale wargame incorporating "sewers" was played there in 1971, at a crucial juncture when Chainmail was seeing heavy use, but dungeon adventures in Blackmoor do not seem to have started yet. By August, Dave Arneson had returned from his summer European vacation, and a full contingent from his Twin Cities group staged Napoleonic games on the main floor of the Legion Hall that year -- though Arneson exempted himself from referee duties for the convention, as he planned to play. Given that he was on hand, and this town-clearing Korns game was the "most popular game of the Con," Arneson surely saw it, even if he didn't play in it personally.

No one should come away from this piece believing that Arneson directly borrowed the idea of dungeon adventuring from this "sewer" game: for one thing, his underworld was on paper, not staged as physical terrain. But the thing that makes events like Gen Con so important to the hobby is how they cross-pollinate between gaming communities, exposing attendees to new concepts that can bounce around in their heads for a while and emerge with a fresh spin. The influence of any given event on a particular person is often impossible to measure: but the aggregate influence of a half-century of this cross-pollination on the community is unmistakable. Which is why I hope that we'll all be back together again in person at Gen Con in 2021.
Posted by Jon Peterson at 2:43 PM