Earlier on in our quarantined year, this blog reviewed how some of the earliest adopters played Dungeons & Dragons by mail, as far back as 1975 -- but socially-distanced role playing was not exclusively a North American phenomenon. Today, in solidarity with social distancing on the other side of the Atlantic, let's look at early play-by-post D&D in Britain, including dungeons like the Anubis Labyrinths, which was carried in the zine Leviathan: the cover of issue #3, from September 1976, is shown above.

There existed many points of interconnection between the wargaming and science-fiction communities in the UK and the USA, so there was no single conduit through which D&D invaded Britain. But when Roger Lightly of Pasadena came to Cambridge for the fall semester of 1974 with a copy of the rules, he spread the gospel of California-style D&D to many of his fellow students. One of them, Graham Buckell, became a vocal evangelist for the game in Britain; it was he, for example, who tipped off Hartley Patterson to its existence, through a letter he sent to News from Bree #14 (March 1975). And soon thereafter, Buckell informed Owl & Weasel in October of 1975 that he had started a postal D&D campaign. 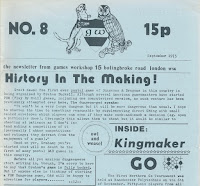 Buckell had already been experimenting for some time with D&D play-by-post systems based on sealed envelopes that players opened to indicate which choices they made at decision points. Nicky Palmer, a Brit then living in Denmark, had elaborated on Bucknell's system earlier in 1975:

So even before the O&W announcement landed, Buckell had recruited fifteen players, which was all that he could handle. But after people clamored for more, Malcolm Griffiths volunteered to run a second section, prudently taking on only five players at once. Griffiths, in a letter to NFB #20, divulged some helpful details about Buckell's style of postal game. Each player constructed a party from a budget of 400,000 points to spend on character levels, races, ability points, and magic items; parties also had a 1500gp slush fund for mundane equipment. The highest-level character in the party automatically becomes the personal character of the player. (I've chopped his column in half for legibility): 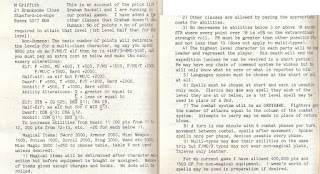 David Tant proclaimed himself the first player to escape from Buckell's dungeons, and his account of it in the fanzine Chimaera #19 gives an overview of how the adventure played in practice. Chimaera was itself a manifestation of the strong zine-driven tradition of play-by-post Diplomacy in the UK, one sparked by Don Turnbull's classic zine Albion (and its little brother Courier). These sorts of Dippy zines routinely incorporated an occasional wargame that played well by the post, and some farmed out gamesmastering duties for particular games to someone other than the editor -- a practice that quickly spread to role-playing games. So it's unsurprising that the editor of Chimaera tapped Tant to run a play-by-post version of D&D  in its pages, a game called the "Pits of Cil."

As the "Pits of Cil" rules show, Tant retained Buckell's point-buy system for parties -- and he wouldn't be the only one. Hard on his heels came another 1976 zine with a similar scope of games, called Leviathan. Its play-by-mail D&D campaign grew out of Clive Wardley's face-to-face "Ancient Anubians" game, which drew heavily on Zelazny's Creatures of Light and Darkness. Wardley gave his initial "Anubis Labyrinths" rules in Leviathan #4 (November 1976), though the reproduction is a bit rough on alternate pages:

So many players volunteered for the Anubis Labyrinths that Wardley had to draw twelve names by lot; MUD fans may be amused to see Richard Bartle among them, he was heavily active in the postal gaming community at the time. Wardley gave players a generous 500,000 point budget to construct their parties, and he allowed recently-introduced character classes, including the Alchemist that appeared in Dragon #2, as well as the psionic abilities as given in Eldritch Wizardry. The general complexity of getting the parties set up  meant he wouldn't publish the game start scenario for the "Anubis Labyrinths" until Leviathan #8 in 1977.

Wardley alluded to the fact that, like Chimaera, Leviathan also ran an Empire of the Petal Throne game, and indeed, looking at the cover of Leviathan #3 above, you can see that it furthermore incorporated En Garde, Boot Hill, and even War of Wizards. Each of these games had their own subzines that shipped to the subscribers playing in them; for example the Petal Throne subzine was the Jakálla Journal (this issue shipped late in 1976):

And Leviathan furnishes just one more example of a British tradition of postal D&D campaigns that followed in the wake of Buckell: another would be Martin Hammon's campaign in his zine The Blimp. As it did in the United States, postal D&D played an important role in the spread and popularization of the game in Britan. Even though in retrospect, these games may look like only a pale shadow of the tabletop experience, the paperwork they generated nonetheless gives us some of the most detailed records of how the game was initially received and adapted overseas.