This single piece of paper constitutes the entirety of the understanding between TSR and the authors of the 1975 Greyhawk supplement: most significantly, it covers a copyright assignment to TSR and an agreement from TSR to pay royalties based on "the cover price of the game rules or game on each and every copy sold." It is quite short, having been drafted pro bono by Gary Gygax's uncle at a time when Tactical Studies Rules was still a partnership, and D&D had sold perhaps 1500 copies. This language is of especial interest because the same form was used for the 1975 D&D contract, and famously Dave Arneson would later sue TSR on the grounds that his rights to royalties extended to titles like the Holmes Basic Set and the AD&D hardcover books. This is a major focus of Game Wizards.

Over the next five years, TSR refined the language of their new agreements to be clearer about what rights authors were assigning, and for which sales they would receive compensation. I am definitely not a lawyer, but I am going to offer below a few layman's thoughts about the evolution of TSR's contract language during this period.

Though no one noticed it at the time, there is a glaring point of ambiguity in this 1975 contract: what is meant here by "the game rules or game entitled Greyhawk"? Does that language refer simply to the contents of the supplement booklet that TSR would publish in 1975? Or might it be read to apply more expansively to Greyhawk, and to any work that might be based on its campaign or setting? This dangerous vagueness would be built into all of TSR's 1975 contracts governed by this form: for products like War of Wizards, the Blackmoor supplement, and most famously, the 1975 D&D agreement.

The next iteration of TSR's contract, in 1976, did not help with this particular ambiguity, as this example for the contract of Bio One shows (which includes some emendations as the game had originally been published by World at War): 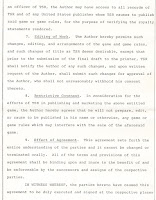 Probably the most interesting additions here are that this new version of the agreement, drafted by local Lake Geneva firm Allen and Lenon, does give TSR some additional powers, such as adapting the rules into a board game or selling associated figures, as well as clarifying any foreign rights to the game. It furthermore includes a "Restrictive Covenant" clause that prevents the author from publishing competing games on the same subject elsewhere. But it offers little clarity on what counts as the "work": it only stipulates that TSR reserves the right to change the work in any way it sees fit, while offering the author a path to approval of those changes, within reason.

If we then look ahead to the summer of 1978, we can see a new form of the contract for the forthcoming title Top Secret: 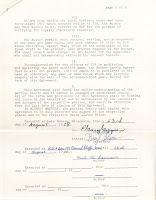 By this point in time, it had become clear that Arneson intended to raise a legal action against TSR over the Holmes Basic Set. Here, the contract language clarifies from the start that by assigning Top Secret to TSR, Rasmussen was also assigning the rights to "any adaptation of said game or game rules for other forms of games or accessories." Accessories had started to become a big business for TSR -- they began selling modules shortly before this contract was executed -- and the Holmes Basic Set bundled in accessories from the very start. But the 1978 contract remains silent on what obligation, if any, TSR had to pay the original author for such things.

After Arneson's lawsuit dropped in 1979, the language around what constituted "the game rules or game" became much more specific. Take the 1980 Deities & Demigods contract:

The 1980 assignment language is quite clear that the authors are granting to TSR not just the copyright, but the "title and theme" of the work and any conceivable related rights. On the second page, it furthermore crisply delimits what the authors will be paid royalties for: "the sale of every copy of the Work," where "a 'copy' of the Work is hereby defined to be limited to and to consist of material published by TSR which is substantially identical to the manuscript or other materials presented by the Author herewith." A formal derivative works clause follows, granting TSR "the exclusive right to prepare derivative works based on said Work," and more importantly stipulating that the "Author hereby agrees that he releases TSR... from having any obligation whatsoever to Author in regard to work... which might be deemed to be a derivate work based upon the Work." And don't miss the part where "the giving of authorship credit, if any, shall rest in TSR's sole and uncontrolled discretion."

Obviously, if the 1975 D&D contract signed by Gygax and Arneson had language to that effect, then the legal landscape for Arneson's challenges to the Basic Set and AD&D would have been quite different. But modest as the TSR partnership's ambitions were, the 1975 contract didn't give us any purchase on whether it applied to works like the Basic Set and AD&D -- they simply were not envisioned at the time. I will stress again that I am not a lawyer, but lawyers have told me that in such cases, judges often try to discern what the unwritten intention behind the contract was. Whatever strong feelings the situation of D&D might inspire, how do we think they intended it back in 1975 when they executed contracts for War of Wizards, or Greyhawk? The very existence of a separate royalty agreement for Greyhawk (one that does not involve Arneson, and was executed on the same day as Arneson's 1975 D&D contract) may give us some inkling of how they understood the situation of derivative works. Anything beyond inklings I leave for readers to determine for themselves.