While Game Wizards has plenty to say about the big picture of TSR's corporate financials, it also pays a lot of attention to the early, scrappy days when D&D was more of a hobby than a business to the people who made it. This visual timeline of the 1972-4 process is intentionally pretty high-level, showing sequences of events rather than exact dates, but it is the working model I used for this era as I wrote the book. It is a little different from the timeline certain books (including mine) have given in the past.

Probably the most dramatic adjustment to the traditionally accepted timeline shown here is dating when Dave Arneson and Dave Megarry made their famous visit to Lake Geneva to demonstrate dungeoneering. I am well aware that this contradicts no small number of sources, including Playing at the World, but ultimately, I no longer believe timelines dating that event circa November 1972 are viable. To quickly summarize: 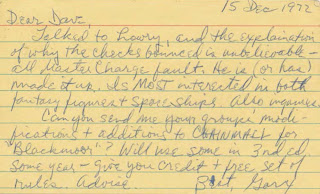 I don't think it's an understatement to say that grungy index card marked the beginning of their collaboration toward D&D as a product.

Pushing the date of Arneson and Megarry's visit forward leads to a more compressed timeline, where the collaboration of Gygax and Arneson happens largely between the spring and fall of 1973. By the fall, Gygax had embarked on a complete rewrite of the game into its three-volume format (an idea which appears to have originated in the Twin Cities, incidentally).

The other significant difference in the timeline reflects when first print brown box D&D was actually published. Though TSR printed the three little brown booklets one at a time throughout January, Gygax suggests the last volume did not come back from the printers until the second week of February: 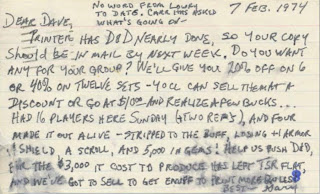 Regular readers of this blog may be wondering if this new timeline induces me to push back when I celebrate the anniversary of the publication of D&D, that is, on the last Sunday in January. My earlier posts about this stressed the difficulty of assigning a "release date" to a game produced so informally, pointing out ambiguities like Gygax's claim that January was when TSR received its first order, which could have been true even if the game hadn't been printed yet, etc. Ultimately, I probably won't move my own celebration date, for the reason given on the bottom half of the postcard above: because Gygax could still run the game for a group of 16 on Sundays before the booklets were all back from the printers. But I wouldn't look askance at anyone who raised a glass to D&D on the first (or even second!) Sunday in February instead.