Units of Value and the Tactical Studies Rules Partnership 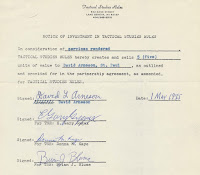 From September 1973 to September 1975, Tactical Studies Rules was a partnership of hobbyists, not a corporation. Under Wisconsin law at the time, partnerships apparently couldn't sell stock shares -- but TSR devised a way to sneak key people some equity in the venture. The above shows the partnership granting five "units of value" to Dave Arneson, on May 1, 1975. So, what were these "units of value"?

The way the Tactical Studies Rules partnership was structured at the beginning of 1975, three equal partners each held 100 of these "units of value": Don Kaye, Gary Gygax, and Brian Blume. Based on a pretty subjective valuation of TSR's assets, they assigned these units a dollar value of $90 each. So effectively, the stakes of the three partners were originally $9000 each -- though much of that was based on assessments of growth potential, it's not as if the partnership had anywhere near the cash on hand to buy out any of the partners if they hoped to sell their stake.

After the death of Don Kaye at the end of January 1975, his stake and position in the partnership were taken up by his widow Donna. Although Gygax expressed confidence that she could handle the responsibilities, her working without salary for a gaming partnership was not an arrangement that could last forever. As Donna Kaye was a partner in TSR for only about nine months, documents like this one bearing her signature are not very common.

Donna Kaye wasn't the only one basically toiling for TSR without a paycheck: Arneson was doing a lot of work in 1975 assisting his friends in the Twin Cities with game projects destined for TSR. In recognition of that, TSR granted him these five "units of value" outright -- effectively a $450 disbursement. That might not seem like a significant sum, but it's in the same ballpark as the total royalties he received for D&D for all of 1974. Arneson was furthermore granted an option to purchase up to 50 more units of value at the $90 price point, which (had he bought them) would have put him on much closer footing to the original three partners.

This helps us to understand why, in mid-1975, Gygax would report that the TSR partnership was not just a triumvirate -- that there were actually five people in it (Ernie had a few of these "units of value" himself): 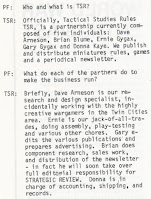 Once TSR Hobbies was incorporated and (thanks to an infusion of Blume family capital) acquired the assets of the partnership, all of these "units of value" were cashed out -- I gather that Donna Kaye ultimately accepted somewhat less than $9000 for her family's share. TSR was eager to bring Arneson on board, and he was given an option to buy shares of the new company, but only 10 shares, rather than 50. Gygax and Blume would keep tighter controls over the shares of TSR Hobbies than the "units of value" of the partnership... though as Game Wizards details, the controls ultimately turned out not to be tight enough.