When the ink on OD&D was barely dry in 1974, Arneson was already complaining about the hit point system. Indeed, he asked one person he corresponded with to share a letter about it to the Great Plains Gameplayers Newsletter. That was venue where Gary Gygax then previewed system revisions to D&D leading up to its first supplement Greyhawk, and Arneson's interest in sharing it there is a stark indicator of his willingness to publicly criticize the published D&D rules:

While his description may be a bit difficult to parse, Arneson is apparently saying that starting characters in Blackmoor would fix their hit points from 1-36 hits. His willingness to criticize D&D only increased after his 1976 departure from the company, and in the text at the top above from the First Fantasy Campaign, he was eager to show how TSR had botched his original vision. There he suggested fixed character hit points were rolled with percentile dice --  probably the original d6 system owed to the fact that they had "no funny dice back then," as he says elsewhere on the same page. At a seminar at Origins that year, one participant recorded that Arneson came back to hit points as a talking point:

Looking ahead a bit to Adventures in Fantasy, where Arneson hoped to correct what he deemed "the many errors in the original rules," we find an algorithm for calculating hit points based on starting character statistics (which were rolled with percentile dice) which seems to favor on average characters having a bit more than ten hit points:

The rift over character hit points is symptomatic of something more fundamental: during his development of the first draft of D&D, Gygax wrote the rules as he saw fit. He drew on system Arneson had sent him, and his experiences playing with Arneson and Dave Megarry, but he showed little deference to Arneson. Once the post-TSR feud between Gygax and Arneson had begun, Gygax claimed (in Dragon #7) that "D&D was not Dave's game system by any form or measure" and that Arneson had "complained bitterly that the game wasn't right." Once this had escalated towards a lawsuit, Arneson would in retaliation portray Gygax as a mere editor of the rules, who had used his editorial prerogative to trample on Arneson's vision. Even in the throes of their dispute, Arneson is clear that Gygax was not just transcribing Blackmoor's vision: "It was very much a case of me providing various ideas and concepts but not having any say as to how they were used."

After the settlement in 1981 cooled the legal flame war, Arneson elaborated that back in 1973 the Lake Geneva crew "came up with their own version of the rules" and sent them to the Twin Cities, where they became integrated into the play of the Blackmoor campaign as Arneson saw fit - Gygax more than once went on record that Greyhawk and Blackmoor used somewhat different rules in the early days. If we look ahead to 1992, to his remarks to The Gamer magazine, Arneson is more explicit in allocating credit for certain system concepts: 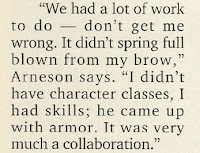 Blackmoor had a diverse character skill system, which in Lake Geneva in 1973 would be honed down into the six canonical D&D abilities. It also seems that the idea that a starting character would choose one of three classes was part of Gygax's contribution. And despite the fact that Arneson would later claim to have derived armor class from a naval wargame. here he seems to be attributing that to Lake Geneva as well. But of course, as with the character hit point system, Gygax would never have developed any of this without Blackmoor: as Arneson affirmed, "It was very much a collaboration."